This is me in the third grade from my first public performance. With a perm in my hair and legwarmers on, I sang “What a Feeling!” from the 1983 movie Flashdance in the school musical revue at Hallsville Elementary. The theatre bug bit me and since then I’ve been a drama geek through and through.

My favorite part of the play performance process has always been rehearsal. Lately, as I’ve been reworking my writing with my critique group, I’ve been struck by some similarities between the theatre rehearsal process and the revision process.

1) Rehearsal/Revision is a safe place to experiment.

In a theatre setting, trust is the most important element between actors. You can often go to an emotionally vulnerable place to discover a truth about the character you’re portraying. You experiment with ways to share that truth, so you need to be able to know that your cast mates are there for you. You also have to feel comfortable being completely ridiculous and silly with them, with no fear of judgment. So, you’re thinking about working some kangaroo movement into a character’s portrayal? Sure! Give it a try!

This is also true about working out the arc of the story you’re writing. I love when I’m having a picture book manuscript critiqued in my group and people share their ideas. Why don’t you have your story end with a trip to the moon? Or how about having your character dance the rumba around the block?

Nothing is off limits because imagination shouldn’t be hindered at this stage.

In rehearsal, you’re generally working with a director who has a vision for the overall production. Directors see how the actors, sets, costumes, lighting, and sound will contribute to the whole story. They guide you in exploration, and help shape how your character is brought to life. Some directors are more general in how they guide actors, others advise you in very specific ways to achieve a certain effect, but what they all share is a desire to tell the story in the best way possible.

In writing, there comes a point when you have to make a choice about what your character will or will not do. You’ve pondered the suggestions from your critique partners, now you have to decide. I think that most writers have a sense of what their story is about and who their characters are, a kind of “still, small voice” that guides the heart of each story.

Take what you’ve been given for feedback, consider it, and then follow that voice where it leads. 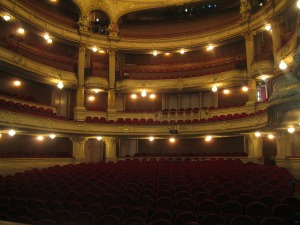 Many theatre productions open on a Thursday or Friday night. The week leading up to that is usually called “tech week.” Or, if you’re the stage manager (the person in charge of all the technical aspects of the show) you call it “hell week.” This is generally for good reason. These are the days when you have to iron out all the kinks of lighting, costume changes, scene changes, etc., so that everything looks perfect and runs smoothly when it’s in front of an audience. You’ve been practicing for a while and now’s the time to put your best foot forward. You want it to look flawless.

Submission to editors and agents is opening night for writers. You’ve polished and prepped your manuscript and crafted your cover letter so that it shines like a chrome bumper on a 1950’s Chevy. It’s unique and it’s yours. It’s your voice, your characters, your vision, and now it’s time to share it with the world. And, if your audience gives you a great review, hopefully it leads to further collaboration and a contract.

So, get out there and break a leg!