To write a good book, you need a killer plot with no plot holes, a vivid setting, and characters that stay with the reader long after the last page has been read. While the plot and setting are equally important, the biggest thing to hook a reader is your character. They want to fall in love with your MC. They need to care about the MC so when something horrible happens, they  are close to tears.

So, how do you do said task?? It’s all about the VOICE.

Your MC’s voice is how they think and talk. As a native New Englander, I have a lot of different sayings than someone who’s from the South. But it’s more than just regional. Some people will think about sports, others about art, etc.

Seems pretty easy, right? Not so much. Voice is about the one thing you can’t really teach. It comes with practice. Some books with amazing voices are:

SIMON VS THE HOMO SAPIENS AGENDA by Becky Albertalli

THE HATE U GIVE by Angie Thomas

All of the above books are single POV, meaning they only have one main character, and thus the book is told in one voice.

But what if you plan to write a dual-POV or even a multi-POV? Writing it in 3rd person tends to be a bit easier because you’re not directly in your characters heard, but mulit-POV can be done in 1st person.

A fantastic example of multi-POV in first person is ONE OF US IS LYING by Karen M McManus.  It is written from the perspective of 4 teenagers. Each voice is crisp and distinct.

So? How do you pull off a huge feat like this? I’m not going to lie, it’s difficult. My latest MS is told in 4 POVs and there are days I am in over my head.

When I began drafting this MS, I wrote the first four chapters, each in one of the girl’s POVs. That allowed me to get a sense of their voice and who they were. Then, I wrote only two of my MC’s chapters straight through to my planned ending. After that, I went back and filled in the missing chapters by writing the other 2 MCs. I chose to do that because those character’s stories intertwined more and their voices were different enough I wouldn’t get them confused. My first draft worked perfectly! I had four distinct voices!

And then I began my edits. I’d originally wrote the MS in the form of blog posts, but I decided to move it into prose. In the process, I lost a lot of the voice distinction. So, I needed to reevaluate my plan.

Karen McManus and I started talking about how she wrote four POV. Her biggest suggestion was different playlists. Make a playlist for each of your characters. Chose songs you think they’d listen to, songs that remind them of their personalities, and immerse yourself in the music. I’d done that, but I needed something more.

I created a VOICE CHEAT SHEET. 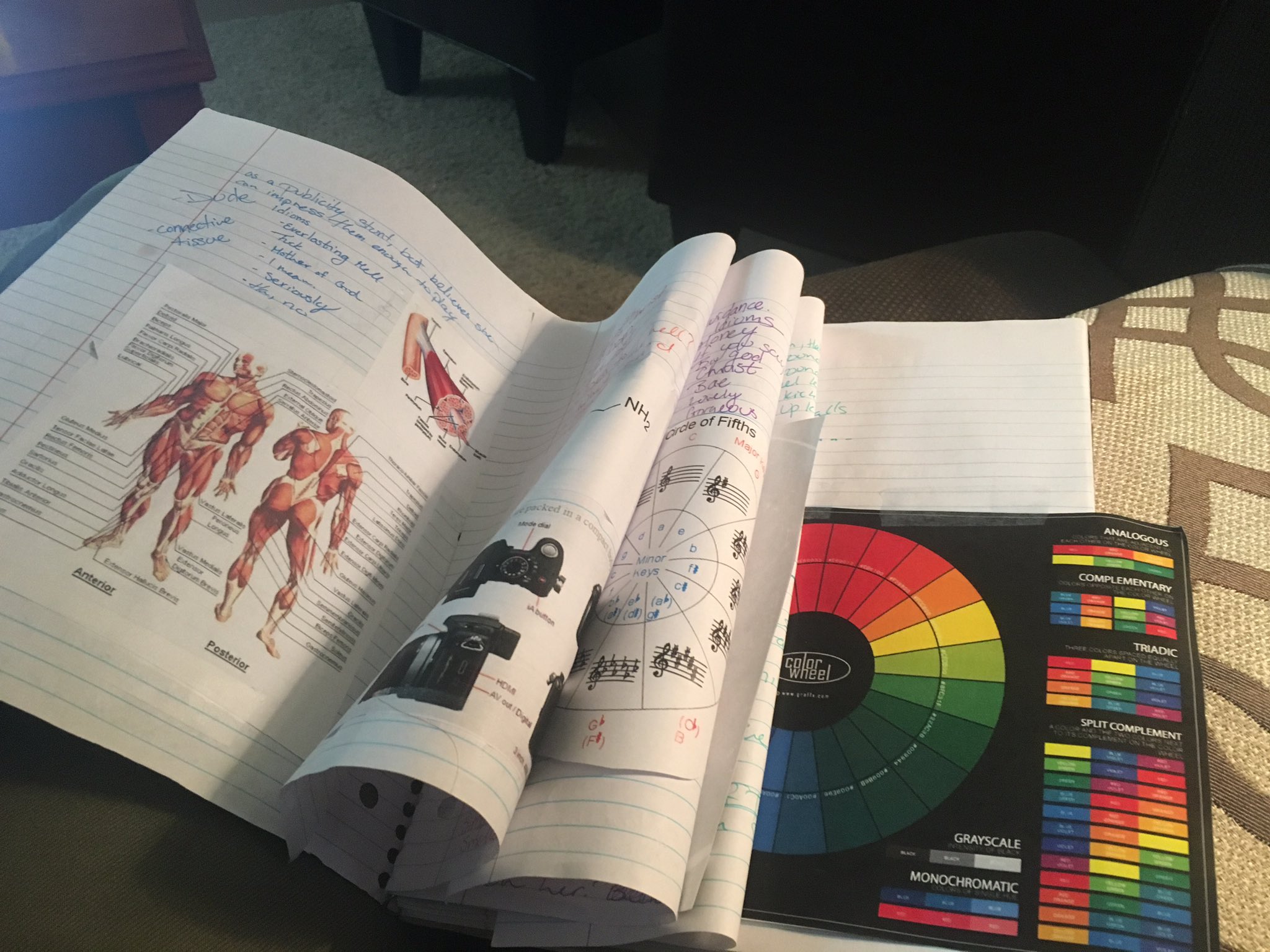 What is a voice cheat sheet you may ask? Well, it’s a notebook full of notes on each of my characters. I chose a different color for each character and sectioned off a few pages. Each page consisted of:

Things they may talk about a lot. For example, my character Andi is a lacrosse player but also a comic book nerd. So on her page, I wrote down as many sports terms as I could as well as lots of cool comic book tidbits.

We have five senses–unless your MC is a shark and then they have seven. Each of us has a dominate sense. Something we tend to notice first. For Andi, she wants to be a physical therapists, so she sees muscle movement and the way people hold themselves. She also thinks about what things taste like.

Each of your MCs are going to say things differently. They will swear differently and have different exclamations. TO make sure they’re using their correct ones, write them down. Some of Andi’s idioms are Mother of god, seriously, and f**k.

Lastly, I pasted any sort of diagram I thought may be helpful for me so I didn’t have to keep going on internet searches. Since Andi looks at muscle movement, I put a diagram of the muscles in the human body at the end of her section.

Right now I am editing by going through one MCs chapters at a time, focusing just on them. The cheat sheet has been instrumental in helping establish their voice and flesh out their character even more.

Do you have a way to make your character’s voices distinct?