It’s the end of November, and with it goes another YA’LL Fest. This was my third YA’LL Fest, and each year I learn valuable information. For those of you new to YA’LL Fest, see Rebecca’s post describing the festival. Briefly, it’s a two-day festival hosted by Blue Bicycle Books in Charleston, South Carolina, that features around sixty young adult authors.

There are four big features to YA’LL Fest: 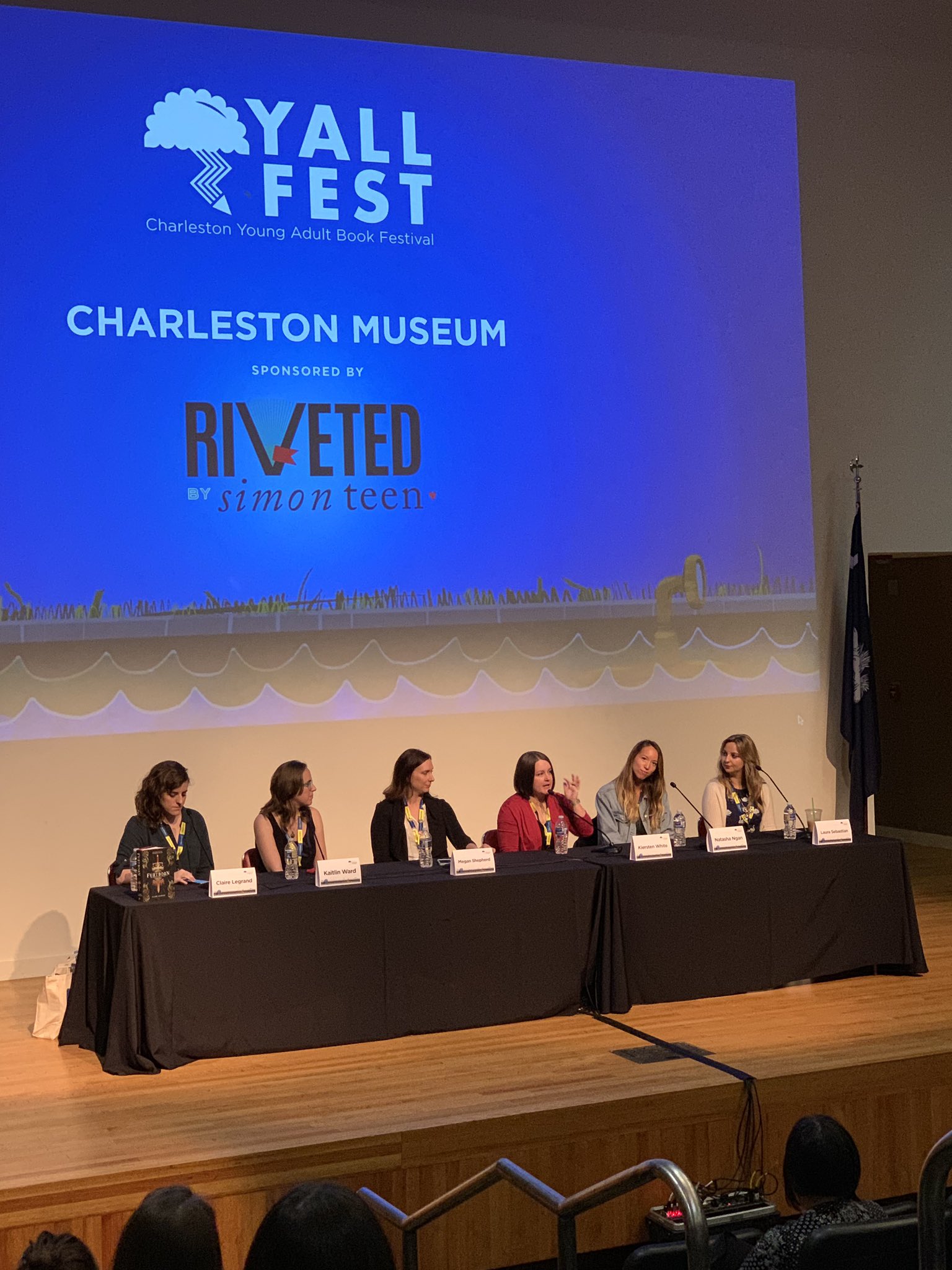 This is one of my favorite parts of YA’LL Fest. As a writer, I love going to the panels because this is where the authors talk about their inspirations and what motivates them. This year, I attended three different panels, I wanted to attend a fourth, but the hall maxed capacity by the time I arrived.

I had a chance to listen to Natasia Ngan share the experiences that drove her to write her novel Girls of Paper and Fire, Stephanie Garber open up about her depression in high school, and Veronica Roth worry that her two best selling series are too similar. Victoria Aveyard spoke about how when she’s accused of writing too politically, she simply replies that her books are based on 17th century monarchies, and if the reader is seeing a parallel, then they need to ask why. Renée Ahdieh spent half of the Myths and Legends panel trying to convince Roshani Chokshi to not write a young adult Santa Claus novel.

Panels are not only for writers, but readers and fans to get to see their favorite author’s personalities. I’m not sure if I learned much about myths and legends during the Myths and Legends panel, but it was one of my favorite panels because of the energy the authors brought.

The events are a little different than panels. They are bigger, and tend to involve the audience a bit more. Three events take place during Friday afternoon. Fierce Friday, Penguin Teen Red Carpet Preview, and Foodie Fun-Antics. Each of these are action-packed and involve the audience. Fierce Friday involves giveaways, signings, and ARCs. It is the event I’ve chosen to go to for the past three years. The first year, I had the chance to meet Susan Dennard and Victoria Schwab. The second year, I got the ARC of CHILDREN OF BLOOD AND BONE. This year, Fierce Friday gave me the chance to get an ARC of AGAIN BUT BETTER. Though I’ve never gone to the Red Carpet, I always hear fun stories. This year, Nic Stone walked down the carpet with a cardboard cut-out of Professor Snape. The Foodie Fun-Antics was a new event this year, but it sold out quick. Books and food always go well together.

As YA’LL FEST is primarily for readers, the signings are a large part. Many readers bring trunks of books to be signed by their favorite authors. My first year attending, I had a list of signings I wanted to attend between panels. But although signings are every hour, expect to be in line for more than that. Lines start about an hour to two prior to signings, and they can take up to two hours depending on the popularity of the author. Some authors, such as Victoria Aveyard, need a cap on the amount of readers or their line will go on for hours. Sometimes those lines can be worth it. Last year, Becky Albertalli drew Simon in every book, letting her line last for hours. However, we were all excited for our drawings, so we stayed.

I’ve mentioned ARCs in earlier passages. ARC stands for Advanced Reader Copy. They are books that have yet to release. Publishers had them out for free in return for publicity and hopefully reviews. YA’LL Fest has many chances to get ARCs. Some of the most anticipated ARCs this year were THE WICKED SAINTS, GILDED WOLVES, BLOOD HEIR, and WILDER GIRLS. However to get these ARCs required standing in line at least an hour prior. The WICKED SAINTS line went across the whole square. There are many choices in ARCs from Contemporary to Fantasy. I believe waiting in line for ARCs is worth it. This year, I managed to get nine ARCs. After I finish them, I plan to do a giveaway, letting others get a chance to read them and spreading the word to support authors.

YA’LL Fest provides a fun weekend for all different readers and writers. It is a book lovers paradise. After three years attending, I plan to head back for a fourth and highly suggest it.

What’s your favorite part of YA’LL Fest? What would you look forward to most if you were to attend? Comment and share!