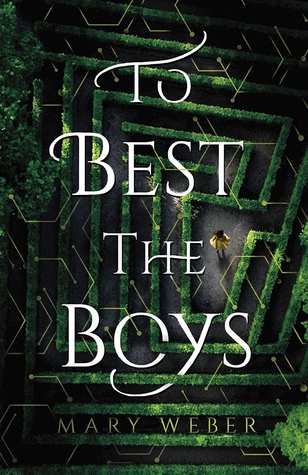 Unable to put it down, I read through this so quickly it’s hard to decipher what I liked best. The world-building is mood-setting. The characters are each unique, admirable, and mostly likable. Though, there is a scoundrel or two, to keep things interesting. The strong female lead, challenges, unbreakable friendships, and family ties combine to make this a great read.

Mary Weber is the author of six YA novels. Because of the entertainment value of To Best The Boys, her Storm Siren Trilogy is now on my must-read list.

Born a Lower and a girl, Rhen Tellur has two strikes against her in this old-world, fantastical seaport village. She has a slight advantage over other Lowers as her Ma was born an Upper, one of the wealthy, and her Aunt, Uncle, and BFF/cousin Seleni still welcome her into their home and upscale parties.

Still, Rhen is more herself in the pubs with her rowdy guy friends. Or, in Da’s lab working on biological experiments in hopes of finding a cure for the mysterious illness, which is paralyzing and killing a growing number of Lowers, including Rhen’s Ma.

Each year every household in the county receives an invitation to Mr. Holm’s estate for the contest.

“All gentlepersons of university age (respectively seventeen to nineteen) are cordially invited to test for the esteemed annual scholarship given by Mr. Holm toward one full-ride fellowship at Stemwick Men’s University.”

Rhen Teller is smarter than any of the boys her age and wants to go to college. There’s only one way to get there – on scholarship. So, she and best-friend Seleni dress as boys and enter the contest.

There is romance: Seleni and Beryll are cutely coquettish throughout the story. Victor, an Upper believes Rhen’s intelligence will enhance his political career. Arrogance abounds as he announces he will court her. And then there’s Lute, the Lower who Rhen has her eye on.

There are angst and danger: the contest can be brutal and harsh. Many are injured. Some have died, generally at the hands of greedy bullies who’ll do anything to win. There are also fantastical creatures to avoid or more often combat.

There are moments of darkness offset by tender spots throughout. The group of teen friends start off working together to escape the maze, locked room, and other tests Holms. The competition turns them cold. Contrast that against Rhen’s heartwarming relationship with her parents and you run the emotional gauntlet.

The love story is interesting, the contest exciting, the descriptions delicious, the characters uniquely engaging. Told in first-person POV, Rhen’s voice carries the story. You will love her.

Thanks to my friend Dana Nuenighoff for the recommendation. A great YA read!