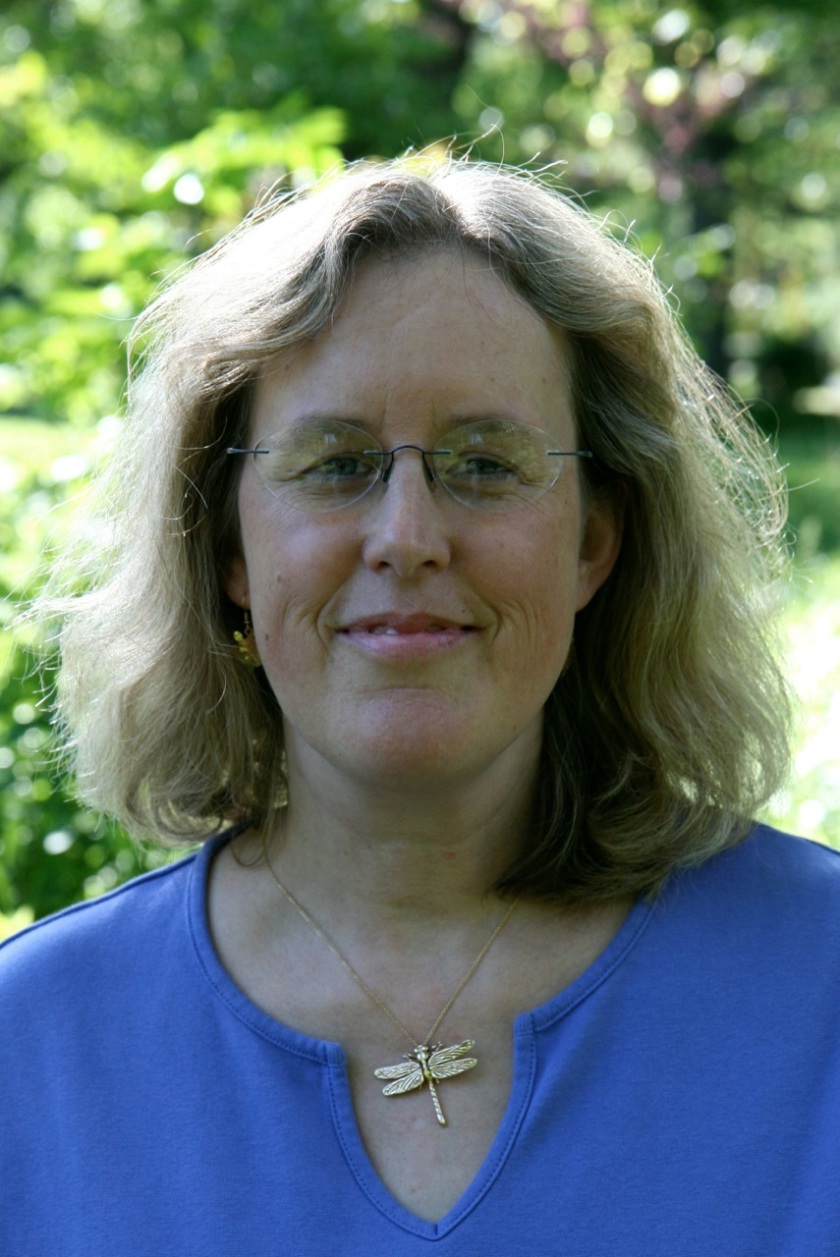 I first met April at Kindling Words, a writing retreat. We happened to have gotten paired together for a funny ice-breaking activity of looking into each other’s eyes. After the retreat, I heard her name mentioned in a critique group, referring to an author who writes nonfiction beautifully. I looked her up on my local library’s web site and she had twenty-eight titles listed there! Very impressive. And here she is, the talented April Pulley Sayre.

Carol Gordon Ekster: You combined a B.A. in biology from Duke University and an M.F.A. in Creative Writing from Vermont College to produce over 55 books. Did you always know you wanted to write to communicate your passion for science?

April Pulley Sayre: I’ve been passionate about nature, photography, and science since I was a very little girl. I cannot remember NOT loving these three. So I dreamed of working for National Geographic. But I also considered being a scientist. I had several forays into being a scientist but found I was better at communicating about science than doing it. Even in high school, as a member of the South Carolina Junior Academy of Science, my experiments were not the greatest. But I ended up being president of the organization and doing well with the communication part. In college, at Duke, I also trained to be a scientist but was even better at being the editor of the popularized science magazine, Vertices. So, I finally realized where my strengths lay. 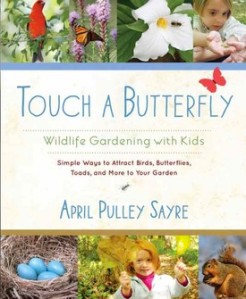 CGE: With so many books, I wonder two things. Have you had to deal with rejection at all?

APS: Ha ha, ha! Some of my most honored books have been rejected 15, 30, even 43 times. Tenacity is the key. I revise and reinvent pieces a zillion times. Only a miniscule sliver of what I have written and completed has been published. Tip of the iceberg. The rest is underwater, waiting to be discovered. I had four rejections last week. Did I mention that rejection is the spice of life? If you’re not getting rejected—you’re not putting yourself out there enough. Or you have not been in the publishing business long enough. Or you are self publishing and have not rejected yourself yet.

CGE: And, are you able to work full time on your writing or do you also have another job?

APS: I have been a full time author for over twenty years. Sheer madness—I know! Every now and then I then I consider getting a sensible job where you know you will have an income and health insurance. But, doggone it, I love what I do. I do make a living at this. That said, some years, 40 percent of my income has come from school visits and other kids of appearances. Other years, it’s all from writing.

CGE:  You’ve won so many awards for your books. Can you tell us about your reactions to this wonderful validation for your work?

APS: Oh, my. You just never know if folks will “get” your work. The reviewers and committee members who read all those books work so hard to lift up, and help the public find, the gems in the sea of new books. To find out that a reviewer or committee member embraces and celebrates your work . . . well, it’s delicious. You feel very warm, like someone just hugged your brain! It gives you hope. And I love it, too, when someone I know wins something or gets recognized in some way. The children’s literature community is just lovely that way. We celebrate for one another. We are all trying to do our best work.

CGE:  Though you mostly write nonfiction, you do have a few fiction picture books. Can you tell us how your process differed in those works? And you also write in both rhyme and prose. Do you have a favorite method and how do you decide which way you’ll write a new manuscript?

APS: My process does not really differ for fiction or nonfiction. My brain gets jazzed up by an idea or a few words and stuff spills out. Then I play with it, shape it, research it, form it, critique it, and so on. Things begin to fall into patterns or forms. I can teach people ways to do this and I have powerpoints that make the process more digestible. Most of those things stimulate people to play and pattern and find the threads they need. Lots of folks are too timid about breaking what they’ve made. I am not. I sometimes write a picture book in seventeen different ways. On a personal level, for me, it’s all sort of organic and goofy. When it’s right, it’s right. It’s a little bit obsessive sometimes, how you feel annoyed and irritated until the right word clicks into place.

CGE:  Have you had any input into the illustrators of your books? You’ve worked with many!

APS: I have not worked directly with most of my illustrators. But Steve Jenkins and I do a lot of books together so we’ve gotten to know one another. (I love his work!) In recent years editors have asked my input about illustrators and illustrations, so I am far more intimately involved in every stage of books these days than in years past. Most of the final decisions on illustrators and illustrations fall to editors and art directors. But I am a sounding board, an interested party, a consultant, sometimes an extra scientific review eye if it’s a subject I know well.

CGE:  Oh, and you even did your own photographs for your clever books, Go, Go, GRAPES! A Fruit Chant and Rah, Rah Radishes! A Vegetable Chant. What was that experience like?

APS: Love it. Illustrating through photography is crazy intense and hilarious. It involves making a lot of mistakes and experimenting with new techniques and figuring things out in the messiest possible way. I have photo-illustrated six of my books. Now I spend four to eight hours a day doing photography and honing my craft with the same intensity I put into writing. I love that work and am constantly taking workshops, and trying new equipment and setups in order to push forward my skills. When I look back on all I’ve learned since starting those books . . . wow. If I could only time travel and tell my younger self the easier way to do these things!

CGE:  You’ve worked with a few publishers. Did you have an agent or did you submit on your own?

APS: For most of my career, I was agentless. I submitted on my own.

CGE:  There are so many hats we must wear as authors—researching, writing, revising, submitting, promoting, dealing with publishers and editors, speaking to audiences, etc. Which aspects of being an author do you love most? Which are challenging for you?

APS: I love doing photography and creating new books. I love creating talks tailored to an audience. Promoting . . . well, it’s okay, I guess. Mostly, though, I can only do promotion if it feels authentic—that I am sharing with people what I love. I’m not good at artifice. Ask anyone who knows me. I’m just . . . real.

CGE:  You use strong verbs and beautiful language in your books . . . even in a book about dust! “Wind spreads dust, floating, swirling, sprinkling, bits of you and me and soil and stars.”

Those are the kind of picture books I sought out as a fourth grade teacher . . . nonfiction picture books written in a lyrical way. Do these lines come to you as is, or do have to work hard to get the perfect wording through critique groups and revision?

CGE: I know you battled an illness recently. Did it influence your writing in any way?

APS: Hmm . . . welll . . . In April 2014 I was diagnosed with breast cancer and had a double mastectomy and chemo and lots of the inherent miserable suffering yuck. I don’t think you need to suffer for your art. And I was already very awake and alive and appreciative of my life before this cancer so it wasn’t a big change for me in that respect. So, I don’t think I know yet how it will influence my writing. I did write a few really unusual picture books inspired by the emotional aspects of those months.

Mostly, though, the work sustained me. All through it, I was working on some upcoming books. So I had the engine of creativity to push me forward, to feel that ongoing spurt of life. In between going to doctor appointments and coming out of MRI machines and surgery and chemo centers, my life was peppered with emails and calls and decisions to be made on covers, colors, photo placements, text tweaks, and the like. It made me feel normal, and joyful, to have this work.

A dear friend, poet/picture book author JoAnn Early Macken, stepped in and helped me on some longer research projects that I couldn’t wrap my brain around when I was very ill with chemo. Children’s book and education colleagues uplifted me. Folks sent me cards, emails, FB messages. It was a very raw, hard time that was interspersed with the kind of clear, generous acts of humanity that astound a person in this situation.

The first thing I thought when people asked how they could help me was this: I wanted them to do something for nature. Plant a garden for butterflies or bees. Take kids out in nature. Plant a tree. Contribute to an environmental group. I just wanted to know that something good would come out of this crappy life event. Quite a few folks jumped in and did so and sent me photos of milkweed they were planting, or taking their kids out to a park, or planting a tree, and so on. Most of all, their well wishes were so touching! The flow of beauty was incredible. Now I’m back to writing full time and am out in nature, tromping around wetlands and photographing. My hair is growing in and I feel really good.

CGE:  What does the future hold for April Pulley Sayre?

APS: More of this lovely work, in the company of my husband, family, friends, colleagues and fans, I hope! My dream is to travel to more natural areas, to explore. And if I can do anything to get people to preserve wildlife and natural areas, that would fill me with joy.

Rah, Rah, Radishes! A Vegetable Chant just came out in board book form.

Next year I have two new books:

Raindrops Roll, which I photo-illustrated, is being published by Beach Lane/Simon & Schuster on Jan 5, 2015. 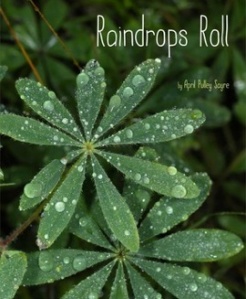 Woodpecker Wham, illustrated by Steve Jenkins, comes out May 12th, 2015. 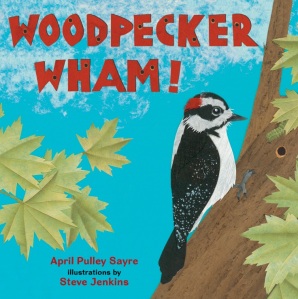 CGE: Thanks, April, for sharing yourself with us! I know there will be many children and adults who will be touched, through your books, by your love of wildlife and nature.