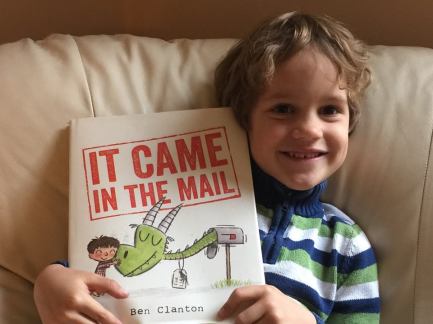 Ben Clanton’s newest book, IT CAME IN THE MAIL, is out today! When the book came in the mail at our house, Sammy and I agreed.  Best. Mail. Ever.  In fact, I had to be very persuasive in order to get my hands on the book long enough to write a review.

IT CAME IN THE MAIL is a hilarious, yet sweet story about a boy who wants mail and in the end realizes that giving is much better than getting. This story will resonate with everyone, especially since snail mail has become even more special with the digital age.

With adorable and expressive illustrations, a creative storyline, and a great message, this book is a definite winner.  In celebration IT CAME IN THE MAIL’s book birthday, I asked Ben a few questions about the book and his process.

Kirsti Call: What inspired IT CAME IN THE MAIL?

Ben Clanton: One of my favorite parts of the day is checking the mailbox. Sure usually there is nothing more than junk mail and bills, but there is always the possibility that something will arrive that will change my day or even my life. Just th 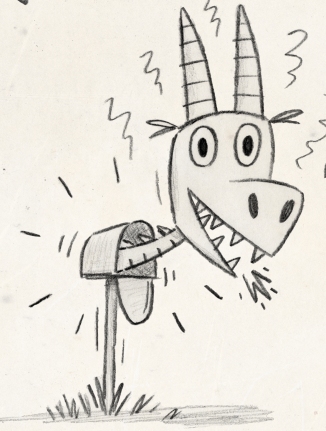 e potential that there might be something extraordinary in the mail thrills me. Such thoughts about extraordinary mail were banging about my brain several years ago while I was doodling in my sketchbook. Soon I had drawn an image of a dragon’s head poking out of a mailbox. To me that image perfectly captured the magic of mail. And it brought back memories from when I was a kid and it was my chore to check the mail. While walking to the mailbox (a quarter mile from my childhood home) I’d dream up all sorts of possibilities. Perhaps there would be a letter from Michael Jordan because he had found out that I was his biggest fan and he wanted to meet me. Or perhaps I won some secret sweepstakes for kids and was now a millionaire. Or perhaps I had been invited to the White House! Upon drawing that dragon in a mailbox, I knew pretty much right away there was a story there that I wanted to tell. It would be the sort of story in which the extraordinary possibilities happened. It would be a story all about the magic of mail.

KC: How many drafts and revisions did you do for this book?

BC: IT CAME IN THE MAIL has gone through oodles of drafts and revisions! Not sure exactly how many but definitely over ten attempts to get this story to what it is now. The idea for the story came about in 2011 and the earliest manuscripts only share some aspects in common with the book they became. My first attempts really focused on the dragon in the mail and were really more about what it’d be like to have a dragon as a pet than about about the sending and receiving of mail and the magic of that.

I found the ending of IT CAME IN THE MAIL to be my biggest struggle. I tried many different endings. I had to dig really deep to find one that worked for me and that didn’t feel overly didactic. I knew that in the end I wanted a sort of reciprocation to happen and a ‘pass it forward’ moment to be there, but that proved hard for me to figure out the details of at first. There were a number of times where I was prepared to settle, but thanks to the feedback from editor Christian Trimmer and art director Lucy Cummins I did the soul searching and drafts to figure it out. 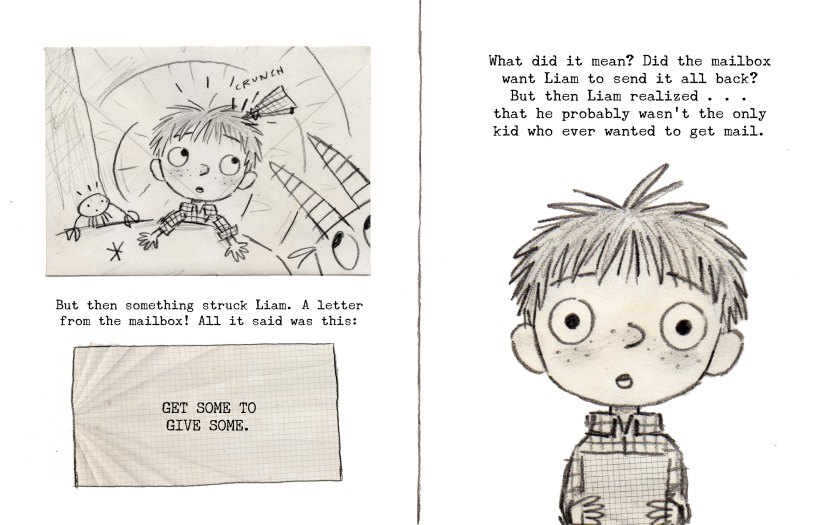 KC: How long has it taken for this book to come out from first draft to publication?

BC:  Over 5 years! I came up with this story around the time I was also coming up with my first picture book VOTE FOR ME! I felt ill prepared for the longest time to attempt to illustrate IT CAME IN THE MAIL. The story meant so much to me that I was reluctant to allow my vision of it to meet the reality that what I create doesn’t look like the pictures in my head. I feel I did a better job illustrating it than I would have when I first came up with the idea for the story, but there is still a part of me that goes ‘maybe in five more years I could have gotten closer to my vision.’ But I’m afraid this is always the case. I’m glad I made the book and feel that it well represents my love for mail.

KC: Any special easter eggs to be found in the book or something you think readers might not know or notice?

All sorts in this book! I had a lot of fun adding little details in this book. For example, if you look real closely at some of the little postal stamps on the items that Liam gets in the mail you will see drawings that kids who have read my work sent me in letters as well as some of my drawings from when I was a kid. Also, throughout the book I used lots of real mail ephemera for the illustrations and one such bit of ephemera I used was the back of a letter from a kid in the early 1900’s who wrote to his aunt to thank her for some bubble gum and a little pocket change. I did my best to use ephemera that was relevant to the content of the illustrations. For example the illustration in which a British pillar box appears is on a postcard from Great Britain (look at the spot market to place postage). 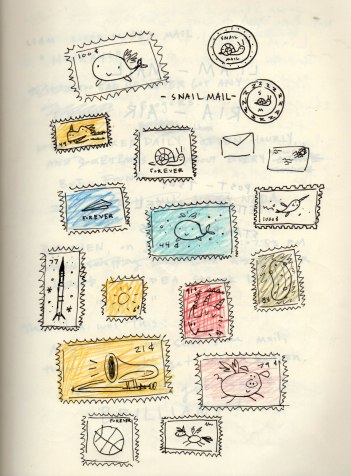 I also really love to have small illustrated sub narratives in books and this book was prime for that. For example, there is a hat stealing crab whose successful theft is later dampened by the new hat his victim acquires. And also there is a wish that Jamel has that is realized in the illustrations, which to me is a really sweet slight story because it speaks to the character of Liam’s mailbox. I think that Pegasus was always meant for Jamel and never really was for Liam.

Oh, and of course I couldn’t resist some wordplay, especially with stamps but I feel if I explain too much it might take away from it. There also are some shout-outs to friends and family in the book. For example, the huge rubber ducky gets sent to Sutter in the end and my brother-in-law just happens to be named Sutter and collect rubber duckies. My friend Amelia really is the sort of person who would love a dancing blueberry. And that robot with the bird on its shoulder definitely has something to do with my book SOMETHING EXTRAORDINARY as the pink mustache does with Mo’s Mustache. Oh, and that bit about spiders in my bio might just be some foreshadowing about a book I’m working on.

KC: What’s the strangest thing you’ve gotten in the mail?

BC: I can’t claim to have ever received anything quite so strange as the things Liam receives, but I did once receive a living plant. Sad to say that the mail was kinder to it than I was. I’ve also received less real/living, but still very much cherished items, such as a dragon, mustaches for my sneakers, a narwhal, and a horn. I even once received a fish on a bicycle (a lovely piece of mail art from Chris Riddell who is one of my very favorite illustrators).

Thanks for visiting Writers’ Rumpus, Ben! 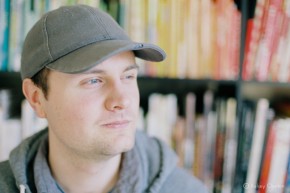 Ben Clanton is a story-scribbler, picture-squiggler, book aficionado, dragon tamer (someday), and avid sock wearer (especially of the striped variety). When he isn’t making up stories (and often when he is) Ben enjoys cooking, gardening, and playing basketball. He lives in Tacoma, Washington with his wife, son, and furry friend.