Grace Lin may not know it yet, but she can heal a tortured heart. This is a power that the best creators of books for children all have, however Ms. Lin’s work, and two books in particular, have stepped in at a moment when help is most needed. The world seems turned upside down, but escaping into Minli’s story brings hope and bits of wisdom.

Recently, some of us have found it difficult to sleep well. Daily news of wildly public insults and anger, hastily made decisions, and selfish pride are worse than disappointing. It has been difficult to concentrate and frankly, daily events are seriously worrying. A friend invited me to attend an event of the Society of Printers, in Boston, next week at which Grace Lin will be the guest speaker. So I read her Where the Mountain Meets the Moon. It was a Newbury Honor Book in 2010 and its companion novel, Starry River of the Sky, has also been given accolades. Ms. Lin’s books have flown to the rescue, thank goodness.

One of the secondary characters in Where the Mountain Meets the Moon is a powerful Magistrate. The villagers call him Magistrate Tiger and he is described as being so proud that villagers were to get down on their knees and bow to him as he passed at any time of day or night or face brutal punishment. He was a fiercely angry ruler. The story tells us that, “The magistrate was harsh with his subordinates, ruthless to his enemies, and pitiless to his people. All feared his wrath, and when he roared his orders the people trembled.” This kind of unjust leader makes it difficult for his people to feel contentment. 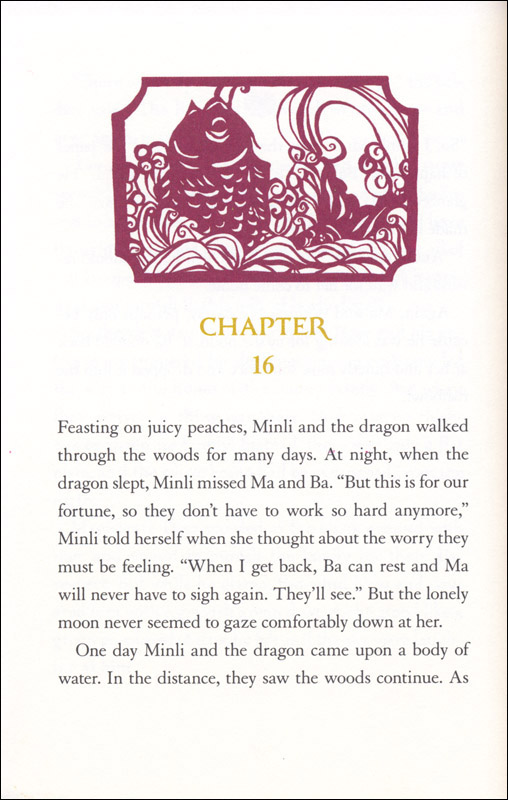 However the protagonist, young Minli, who is so poor that the only meals she and her parents have to share are plain rice, is brave and daring. The reader identifies with this kind-hearted, quiet, polite girl who uses her natural wisdom and common sense to guide her. She sets off alone to find the Old Man of the Moon at Never-Ending Mountain to ask how she can improve her family’s situation. Along the way she meets a dragon who was born of an ink brush painting and becomes her accomplice along her mission. The reader is thrilled to ride Dragon with her, soaring toward a better destiny.

The many characters Minli and Dragon meet each share something useful. The Old Man of the Moon is guardian of a bag of red Strings of Destiny and the big Book of Fortune. The goldfish man and his wares bring an element of mysticism and the Green Tiger adds a touch of dark evil. Minli’s world is filled to brimming with challenges that make it seem impossible for her to achieve her goal. But in the end her journey across the red thread bridge to the sky brings her to an unselfish act that sheds light on her solution. By the time she returns home her travails are rewarded with a much better situation for her and her parents. In the end the selfless little peasant girl is better off than the powerful, but heartless, Magistrate Tiger.

For the reader, a sense of enormous relief accompanies this outcome. Throughout Minli’s long arduous journey she has been honest, thoughtful, and generous. She is rewarded with the riches of contentment and prosperity for her family and thereby herself. The wisdom within her story is a balm for the heart. It is exhilarating to know that goodness and wise choices can win out over the seemingly powerful.

Where the Mountain Meets the Moon is decorated with chapter openers of lovely art which echo the traditional Chinese art of papercutting. Each is printed in a different solid color and the headline type is in gold. There are also pages illustrated with colorful paintings which enliven the book and make it a lovely package of Chinese culture. The painting of Dragon and Minli soaring across the book cover through clouds painted in the same style as ancient Chinese art extends the aura of these stories.

Starry River of the Sky, a sequel, is similarly designed with Ms. Lin’s deep palette and culturally infused art. And this story is also a blend of an original story arc tying together a series of myths strewn with pragmatic wisdom. The book begins with a runaway boy, Rendi, who seems to be the only one who notices that the moon is missing. He hears the sky crying over this loss and immediately the reader is mesmerized by the mystical world within these pages. Magistrate Tiger also has a role in this companion story.

The reader craves the sense of wisdom and destiny contained in these novels inspired by Chinese mythology. Grace Lin has done an amazing job of weaving traditional stories into one completely her own, and better still are the truths about dealing thoughtfully with the rigors of civic life that she has brought to her readers.

Grace Lin’s wisdom glows in these books. That is a healing gift to readers, which is particularly important at this moment. 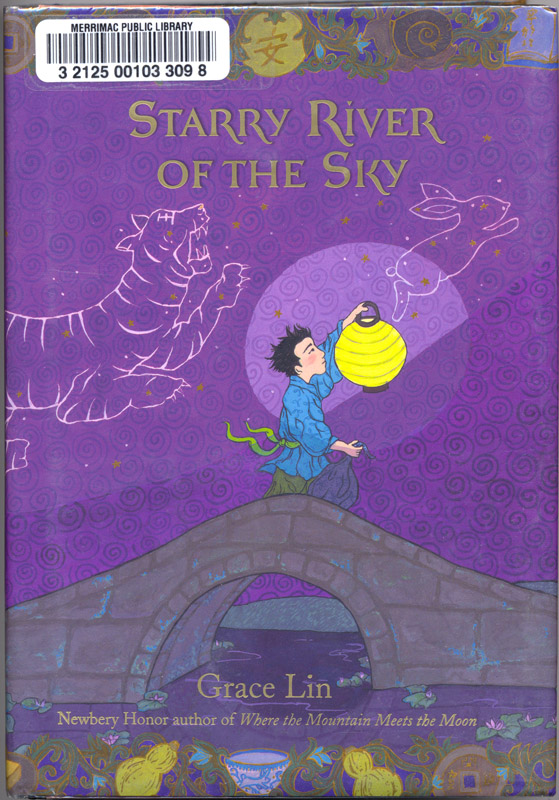 Addendum: Last night I attended a wonderful event at the Society of Printers in Boston where Grace Lin was the keynote speaker. She introduced her presentation as an extended version of a TED talk she had given, which you can find here. The points she makes, which she is passionate about, are more significant now than ever before. At a time when forces are trying to coagulate white voters as being separate and of more value than minorities, children’s books like Grace Lin’s, which are windows on the world, are our responsibility to our children.