Last month, I participated in a 24 Hour Play Festival as a playwright.

Essentially, I was locked in a theatre with a group of writers and actors for twenty-four hours. At 10:00pm Friday, the playwrights picked actors’ names out of a hat to see who they would be writing for. We were sent off with our new cast and instructed to create a one-act play. I started writing at midnight, and finished around 4:30am. We rehearsed all day and at 8:00pm Saturday, we performed the plays. 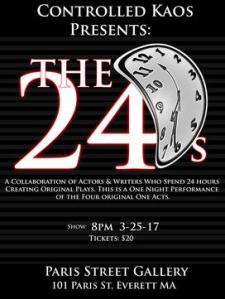 My roots are in the theatre. I have been writing plays since middle school; I have continued writing and also directing for my professional teaching career. I have self-published several of these Ms. Potoma Plays for young people on Amazon.

It has been about six years since I’ve participated as a playwright for myself and not in a teacherly capacity. To be honest, I wasn’t even sure I could do it.

I ended up writing a twenty-two page play called Gazing, with five characters and multiple scenes, in four and a half hours, exceeding any expectation I had of myself. By the way, I haven’t pulled an all-nighter since high school, and it was exhilarating.

Here are six takeaways from my experience with the 24’s that I think apply to all writers, whether you’re writing poetry, picture books, middle grade, young adult, or adult.

A kernel of an idea is enough to get started. Find something that you’re passionate about, and the words will flow.

I wanted to work with the idea that the moon was falling. I didn’t know if it was literal or figurative, but I knew I was passionate about space (no wonder why I started writing science fiction novels). In my play, the moon ended up being connected to an end-of-days cult philosophy. Who knew?

If you’ve got a gut feeling about an idea, go for it.

You are capable of more than you think you are.

It is possible to write 3700 words in four and half hours. I didn’t think I could write that much in one day, let alone a few hours, but I surprised myself and you can too. Sit down and write. When you want to give up, don’t. Find your inspiration and keep going. You can do it. Surprise yourself.

I don’t recommend pulling all nighters. It took me three days to recuperate.

Listen to your characters.

Let the characters’ voices tell you what happens. Sometimes they will say the complete opposite of what they really mean. That’s okay! Give the characters themselves some power, and they might bring you somewhere you hadn’t thought about. I talk more about this in my post, How to Write Successful Dialogue.

Don’t get bogged down in the details. You can always go back later to finesse. I changed the name of the wife three times while writing. I didn’t have the time to really hem and haw about it, so I just changed it. Finally, I settled on the perfect name after most of the script had already been written. Find and Replace can be your best friend.

I wrote a play once where the best friend was a girl. Then I realized that without changing any lines I could make the best friend a boy, and the whole thing was so much more interesting. Find and replace, baby.

Be proud of your accomplishments.

There is nothing like holding a finished script (or novel) in your hand. Yes, I know, until it is officially published the novel is never really finished. But making it to end of a story is extremely satisfying.

I had the pleasure of seeing the play that I wrote in four hours performed the next evening, memorized, costumes, props, lights, audience and all. The last lesson, and the most important one, is this: Be proud of your accomplishments. Writing is hard. Allow yourself the time to enjoy your efforts.