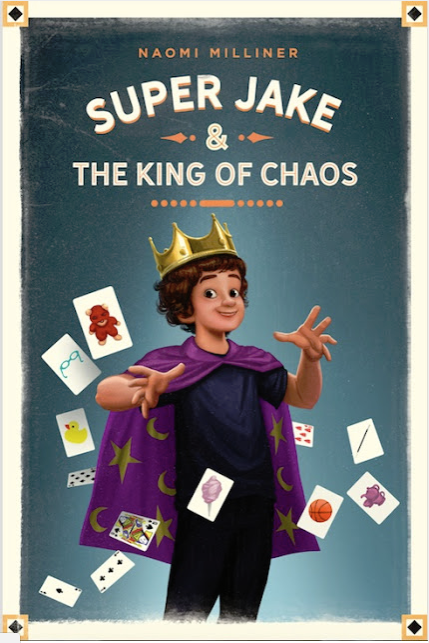 If I had a dollar (okay, maybe a hundred) for every time someone advised, “Write what you know,” I could buy a mansion… or at least a comfy townhouse in the poorer part of town. Not only that; it must be good advice because my debut middle grade novel is based on people and events in my life. So I know them very well indeed. And yet…

It took sixteen years for SUPER JAKE & THE KING OF CHAOS to be published. Turns out writing what you know can be harder than you think. At least, it was for me. Let’s give a few examples.

There were other changes too, and one was monumental – but revealing it here would give too much away. You’ll just have to take my word for it… or read the book.

Still, the real problem was this: What I knew wasn’t enough. What I knew was a young boy with severe brain damage. In my heart, this book was always about Jake. But it wasn’t a memoir; it was middle grade fiction.

I think this is the downside of “write what you know.” There were countless times in my critique group when any one of us said to another, “That doesn’t make sense,” or “That’s really hard to believe.” And the writer under fire always responded, “But that’s what happened in real life!”

Lesson learned the hard way: just because something “really happened” doesn’t make it believable in a fictional world. Just because telling Jake’s story was foremost in my mind when I started writing it, didn’t make it his story. And just because I knew my subject matter inside and out, didn’t mean I knew the best way to tell it.

So for what it’s worth, here’s my advice: Write what you know, then figure out what you don’t. Leave enough of what’s real to keep it honest and authentic, but add enough fiction to turn it into a real story.

Naomi Milliner has a Bachelor’s Degree in English and a Master’s in Screenwriting from USC Film School. As a long-time member of SCBWI, she created the Authors Book Club (ABC) for published authors and illustrators to share their journey with other members. She has also served on the Women’s National Book Association’s Great Group Reads Committee since 2009. Super Jake & the King of Chaos is her first novel, and is inspired by her family. She lives in Maryland, with her husband and sons, and two ridiculous felines.