The Mystwick School of Musicraft by Jessica Khoury is a light fantasy for middle grade readers. In this story, a young girl seeks to win a spot in the magical school of musicraft, where her mother, long dead, was once a star student.

If you’ve heard anything about this book, there’s a good chance it’s been in comparison to that OTHER book about a boarding magical school–early reviews have been peppered with comparisons. I personally didn’t get a heavy Hogwarts vibe, but you can decide for yourself! 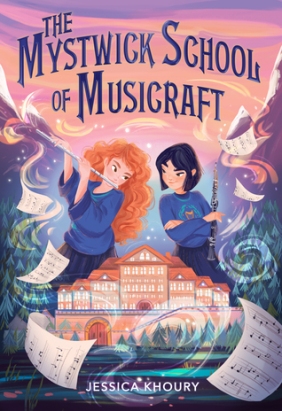 Budding young musician Amelia Jones has always had one goal: to be accepted into the Mystwick School of Musicraft, where her mother, who died when Amelia was young, was once a star flute player and maestro. There, world class maestros teach students how to create music so stunning, it has actual magical powers. Powers for growing things, powers for healing things, power for pretty much anything. Maybe even enough power to raise the dead—or at least their spirits—long enough for Amelia to find out what happened in the accident that killed her parents but left her alive so long ago.

However, Mystwick only takes the best—and when Amelia arrives for her audition and hears the other Mystwick hopefuls play, she fears she isn’t in their league. If that wasn’t enough, her audition goes horribly wrong when her musicraft escapes her control, landing her on the wrong side of the lead maestro she desperately wants to impress. So, Amelia is understandably surprised when she receives an acceptance letter.

Once she arrives at the campus, though, she learns there’s been a mistake: her letter was meant for another (much more talented) Amelia Jones. The letter had been sent to a famous pianist who shares Amelia’s name and who was recently reported lost at sea.

But with one Amelia Jones missing, it seems the school has an open slot—one that might be Amelia’s, but only if she can earn it. The maestros offer Amelia a deal: if she can improve her musicraft to the level of the other students over the next few weeks, she can stay. Amelia can’t help but notice they don’t seem to have a lot of faith in her. Honestly, neither does she. But Amelia is willing to do anything to stay at her mother’s academy, even if it means turning to black musicraft to get what she wants. And, it turns out, she may not be the only one.

This book is simply delightful. The spunky main character Amelia Jones, with all her fears, anxieties, and secret longings, is winningly relatable. Readers will cheer as she navigates her way around Mystwick, trying to earn her place in the pack while tending to friendships, both easily made and hard earned, while solving the mystery of the ghost that’s been haunting her steps since her arrival.

Amelia’s journey through grief and acceptance over her parents’ deaths is an important one, and though I do wish these feelings had been explored more in-depth, the story’s resolution was satisfying. Khoury’s middle grade voice is authentic and her writing is elegant in its simplicity, so much that it’s practically invisible, allowing characters and story to take center stage, which is just how it should be.

All told, The Mystwick School of Musicraft will delight young readers and is suitable for ages eight and up, though adults with a penchant for light-hearted middle grade reading may also enjoy it. Honestly, I wouldn’t hesitate to champion this book to anyone with a love of music, fantasy, or just great stories.

I happen to be a big fan of audiobooks, and while this book is likely to enchant in any format, the Audible Original version of this book, narrated by Suzy Jackson, includes original musical compositions that really bring the Mystwick School of Musicraft to life. I’m not affiliated with Amazon, and I don’t typically plug their products, but the production on this one is rather spectacular. And it makes me curious to know how other people like to enjoy their reading!

Do you use audiobooks? Are there certain titles you prefer listening to, rather than reading? Tell us how you like to read!