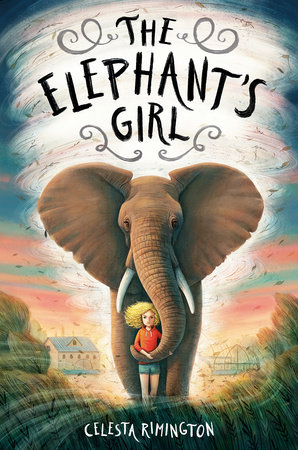 ​​The Elephant’s Girl by Celesta Rimington (Random House, May 2020) is a charming middle grade novel that explores the nature of family, friendship, and honoring the past through the relationship of one young girl and an ex-circus elephant. Full of heart and featuring a family mystery, this book will delight and enchant young readers who love animals, zoo and circus settings, and just the lightest touch of magic.

Twelve-year-old Lexi Willow lives at the Lexington Zoo in Nebraska. She’s lived there as long as she can remember–ever since she was found clinging to the trunk of the zoo’s elephant, Nyla, in the middle of a class EF5 tornado when she was a baby. Since then, she’s lived with zoo employee Roger Marsh, receiving home schooling and helping to look after the animals of the zoo. She has a special connection with her savior, of course, but sadly she doesn’t get to see Nyla too often because she isn’t allowed in the elephant enclosure without supervision. Thankfully the zoo’s elephant keeper, Thomas, has been around long enough to know that the connections between some humans and the elephants can be strong enough to be undeniable, and he helps Lexi get closer to Nyla.

It seems like Nyla has been waiting for just such an opportunity–as soon as she comes into close contact with Lexi, Nyla uses a low rumbling communication to talk to Lexi–and Lexi is shocked when she receives clear images along with the sounds. Nyla is showing Lexi pictures of the circus where she used to live along with three other elephants–and pictures of the woods right outside the zoo. Lexi figures the elephants are Nyla’s family, and that the elephant wants to see them again, but she doesn’t have any idea why Nyla would show her the grounds outside the zoo. With the help of her best friend, Fisher, Lexi sets out to solve the mystery Nyla has laid out for her, having no idea that she’ll encounter ghosts, mean girls, and more on her journey to the truth about Nyla’s family and her own.

The Elephant’s Girl spins a delightful mystery that traces Lexi and Nyla’s personal histories through the zoo, the circus, and beyond and Lexi tries to discover the truth of where she came from before the fateful tornado that tore through town, presumably killing her parents in its wake. In the end, Lexi learns that families can come in all types, and that it’s OK to honor the past while still embracing the present. The story is sweetly moving, with enough twists and red herrings to keep things interesting. Lexi is a relatable narrator with more than a few fun quirks, who kids are bound to enjoy. All told, The Elephant’s Girl is a fun middle grade contemporary with just enough mystery and magical realism to keep things enchanting–but the real pull is the incredible love that guides Lexi toward the truth about herself, her family, and Nyla’s.

…Magical Realism seems to be inching into the middle grade space–tell us, what do you think of books that offer a touch of magic?

By Kim Chaffee, Illustrated by Alexandra BadiuJanuary 10, 2023
31 days to go.