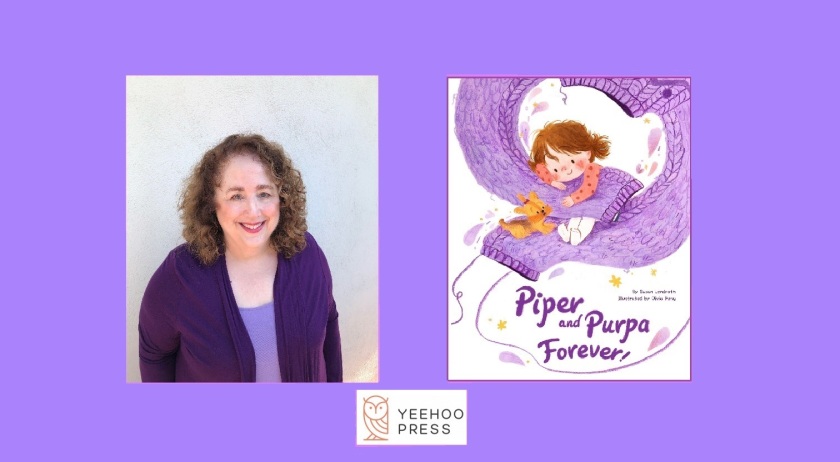 This year’s Super Tues(2)day – 2/22/22 – was indeed a super day for me when my picture book Piper and Purpa Forever! was published by Yeehoo Press. Not only was it exciting to have another book published after a two-year hiatus, but working with Yeehoo marked my first experience of being published by a house based overseas.

Yeehoo is relatively new to the American publishing landscape and, unlike many presses, they are actively calling for submissions from both agented and unagented authors. Every picture book that they release is issued in both English for an American audience and in Chinese for the vast market of China. That aspect alone intrigued me. But I also found the entire editorial process to be a different experience than that for my previous picture books, which were all published by U.S.-based houses.

For one thing, it was lightning fast! I submitted the manuscript in August, 2020; received an email expressing interest two months later, in October; signed the contract in November, 2020; and saw my book hit the shelves in February, 2022 on Super Tues(2)day – 15 months from contract to release. By comparison, one of my other books took five years from acquisition to the finish line.

Both the editing and the design experiences were also different than any of my previous picture books. My editor in China, Zhiqiao, asked me to lay out the text with page turns and even to propose how many scenes to depict per two-page spread. Initially, I found these design decisions a bit daunting as I have been accustomed to dropping my words into one end of some mysterious publishing machine that cranks out a finished layout a year or more later like magic (well, slooooow magic). However, eventually I realized how much more of the “picture” side of picture book writing I now had a say in, something rare for a non-illustrator. I was even given a choice of four covers to rank, and the editor and I came to a design consensus that I love. Olivia Feng’s art is wonderful!

“Consensus” is indeed the perfect word to describe how Zhiqiao and I worked together. Sometimes cultural differences made us view the text from different perspectives. Piper and Purpa Forever! concerns a young girl who falls in love with a purple sweater from a box of hand-me-downs when she is a toddler and is unable to pronounce the word “purple,” calling the sweater purpa.  She wears Purpa for years until it becomes too tight for her. What can Piper do to keep her old friend?

I had to hold fast to my vision of the child being the one who solves the problem and makes the decisions about Purpa. Zhiqiao and I exchanged several emails with my reasons behind this plot point and his interest in having more input from Piper’s father. Eventually, I understood that parents in China would want to take a more active role in trying to persuade a child not to wear an old garment, and I added a line of text here and there to strengthen how they demonstrate their concern. After all, I want my book to resonate with audiences in both America and China. In turn, Zhiqiao allowed me to keep the ending unchanged, and we were both pleased with the final result.

Ultimately, I am delighted that Piper and Purpa Forever! feels a little different than my previous works. Besides, finding new and creative ways to reach children is one of the reasons many of us become children’s authors, isn’t it?

Susan’s picture books range from history to science to falling in love with a purple sweater. If she had a magic door that could open to anywhere, she would love to walk through it whenever she wanted to go to England or Scotland for a cup of tea and a walk with the past. Meanwhile, she works for the Los Angeles Public Library, so has access to one or two books to keep her busy. Connect with Susan on Instagram and on Facebook.

To submit to Yeehoo Press, visit their website at https://www.yeehoopress.com/submissions/

By Josh Funk, Illustrated by Brendan KearneySeptember 20, 2022
4 months to go.