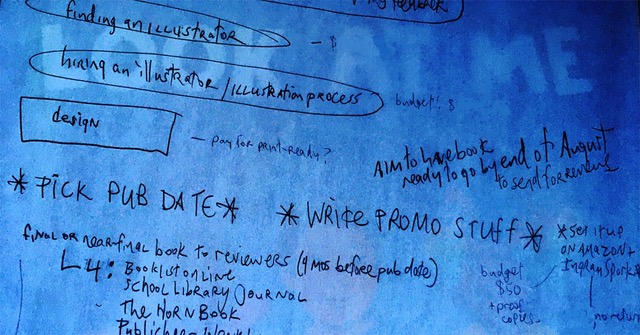 Technology has evolved to make self-publishing more accessible, and a cultural shift has taken away the stigma of years past.

I can remember wishing for this sort of landscape in the late 1990s, when many of my friends were independent musicians releasing tapes and CDs on a regular basis and I had no comparable outlets for my fiction. In 2009, when I finally took the self-publishing plunge with my memoir MAP, it was still an unusual choice—and the book’s Lambda Literary Award Finalist designation was not only a thrill but also an important shorthand for getting taken seriously.

I discovered the self-published picture book explosion by happenstance mid-pandemic, trying to update my industry knowledge to better help another author, and soon joined in. I’m fascinated by how much has changed in such a short time… and how much hasn’t.

What does it take to succeed in this new landscape when it comes to self-publishing a picture book?

Here’s one anchor point. These numbers come from someone well-regarded in a children’s book self-publishing discussion group I follow. They’d been at it for four years, treating self-publishing as a business—authoring nearly a dozen children’s books, mostly picture books. They’d made a three-figure profit in their second year after operating in the red for the first, then built up to around $40K profit in their fourth year. Impressive. Better than most traditionally-published picture book authors. It had taken a lot of hustle—and around $50K in expenses for that year alone (nearly half on Amazon ads).

Here’s another anchor point. My picture book BEAR AND DRAGON CAT went from first words to illustrated and ready-to-print book in a total of nine days back in 2019. I had no plans to publish; this was a silly story I printed a few copies of through Lulu.com as a gift for a handful of young kids, which I’d illustrated myself with drawing skills on a par with the book’s intended recipients. Then in the summer of 2021 I decided BEAR AND DRAGON CAT might be appreciated by a wider audience. I went from final decision to publication overnight, using Amazon’s Kindle Direct Publishing (KDP) and spending a grand total of six dollars and thirty-three cents, and the book turned a profit almost as quickly.

There’s not one sole way to succeed, and it is possible to access picture book self-publishing at many different levels of time, commitment, and resources.

With rare exception, it would be more financially profitable for most authors to spend the time they put into it working a minimum wage job. But at core, I believe most authors are driven by some version of I have a story to tell that I want to share with people. Success is finding the way to make that happen.

You might be wondering if BEAR AND DRAGON CAT is any good. It’s a legitimate question for any self-published book. After all, there aren’t gatekeepers. You can look for social proof, but ultimately it’s up to you as the reader to make that call.

One of the marketing strategies for self-published picture books is to create a fixed-format ebook version and periodically make it available for free—in the hopes of generating both reviews and print book sales, along with some name recognition.

From what I’ve seen downloading a ton of these books, quality is all over the map.

There are occasional surprise gems (Karen Wyle’s YOU CAN’T KISS A BUBBLE comes to mind) and a predominance of books with sub-par writing and/or poor editing. Number of sales and reviews are not especially correlated with the quality of the book, but are very correlated with marketing skill and effort and the size of an author’s network. Self-published books are primarily sold online, where it is tougher to evaluate quality than in a bookstore (to the benefit of mediocre writers and the detriment of readers). Marketing—and to a lesser extent, illustration—is driving sales.

For everything I write, I try to find the best way to introduce that particular piece to its audience, and I keep going until it finds a home… whether that home is traditional publication, a drawer, a copy for a friend, self-publication, or something else.

As I type this, I have two picture book manuscripts awaiting answers from small publishers, a short list of literary agents I’m researching, and a collaboration with an illustrator friend on something we’ve been calling The Secret Picture Book Project.

My second self-published picture book, LOOK AT ME, is out in the world—in kids’ hands, in both school and public libraries, available internationally from one of the largest book distributors. This is a book that shows what adults often consider trappings of gender from kids’ mostly-non-gender-focused perspectives—a book that the publishing world wasn’t ready for when I first wrote it many years ago, but which still felt valuable and important enough to invest in. With a too-modest-to-hire-locally budget, I had sought out international illustrators on the freelance marketplace Upwork last summer, and I lucked out with a fabulous illustrator from Russia. She wanted the kids she knew to be able read the book too, and she and I were preparing to publish a Russian edition of LOOK AT ME when the war broke out. (She’s safe, thankfully, though the project is on hold for now.)

And I’m also in the midst of my most ambitious self-publishing project yet: THE DAY MY BEST FRIEND AND A MIGRAINE SLEPT OVER.

This is the first project where I set out from the beginning to self-publish. I was curious what that would be like. To decide at the outset on self-publishing, and then write the book.

The curiosity started last summer (2021), after publishing BEAR AND DRAGON CAT, while working on LOOK AT ME. The first manuscript draft emerged in September 2021. The story felt like the perfect fit for self-publishing: a clear niche core audience, with the potential for a larger audience, but not likely to be profitable enough for a traditional publisher.

I’d been guided in part by this question: was it possible to create a book that both captured the experience of migraine—something I’d never encountered in a picture book—and provided an enjoyable and engaging read, even for mainstream readers who had no relationship with migraine?

(Want to weigh in? THE DAY MY BEST FRIEND AND A MIGRAINE SLEPT OVER is currently available for pre-order.)

I had an illustrator in mind when I was writing. I sought out families dealing with pediatric migraine for feedback on the manuscript (sadly, I discovered that my niche was a lot larger than I’d thought). I ran a Kickstarter campaign in January 2022 to raise funds (it turned out to also be a valuable tool for market research). Once the illustrations were complete, I sent digital review copies to a handful of major review outlets in the traditional publishing world (even though it’s a long shot for a given self-published book to land one of those reviews).

In June—nine months after I wrote the very first words—I got to hold printed proofs of the book in my hand.

On October 11th 2022, THE DAY MY BEST FRIEND AND A MIGRAINE SLEPT OVER will be published, and I’ll return with another blog post that month to share more practical details about the process.

Meanwhile, I’d love to hear from you—what’s your experience with picture book self-publishing, and what are you most curious to learn about it?

Audrey Beth Stein is the author of the picture books BEAR AND DRAGON CAT, LOOK AT ME, and  THE DAY MY BEST FRIEND AND A MIGRAINE SLEPT OVER, as well as the memoir MAP, which was a Lambda Literary Award Finalist. She earned an MFA from Emerson College and taught creative writing workshops for a decade at the Cambridge Center for Adult Education. You can learn more at her website and follow her on Instagram.

By Josh Funk, Illustrated by Edwardian TaylorNovember 1, 2022
77 days to go.