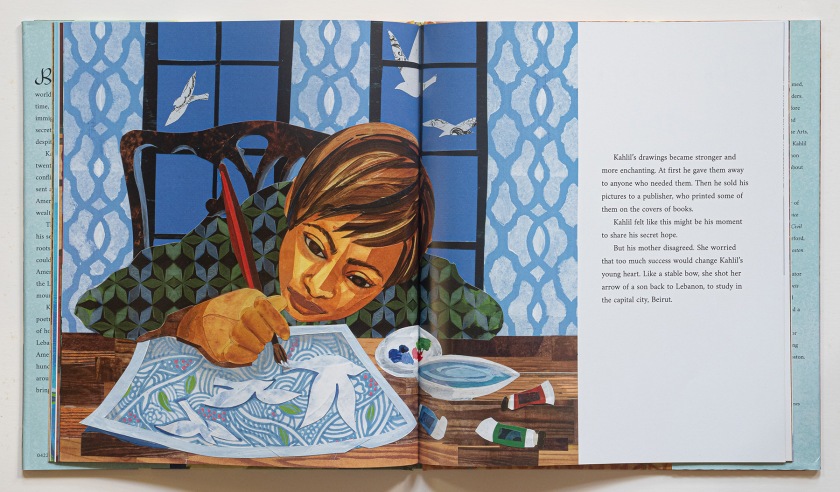 “There once was a boy shot from a bow like an arrow. / Strong and straight, he flew across the world, connecting many people with the power of his words. / But not right away.” So begins this lovely picture book biography of the poet and artist whose secret hope to spread love and understanding still inspires.

Born near an ancient forest in Lebanon, shy Gibran Khalil Gibran sought refuge among silent thousand-year-old cedars when strife overwhelmed him. Gibran’s family was torn apart by his people’s religious conflicts and fear of one another. When they lost their home and his father was sent to jail, he, his mother, and three siblings sailed across the Mediterranean, then the Atlantic hoping for a better life in America, the land that promised independence. In Boston, the transplanted family struggled among hundreds of other recent immigrants.

At the Quincy school, administrators shortened his name to Khalil Gibran. He played among a hundred immigrant children in a South End alley, a nearly silent boy surrounded by a swirling world of displaced kids. Daily, to scorn from the wealthy, his mother peddled a fifty-pound bag of lace and linens, eventually earning enough to open a family store. Khalil watched as his family’s poverty was derided by the well-established. His secret hope was to overcome the fear of difference everywhere he knew. But he could not yet express that in words.

So Khalil began to draw. And paint. His teachers saw a special light glowing from his art. Photographer Fred Holland Day took many photographs of this sensitive boy and helped him develop his art. When a publisher bought Khalil’s portfolio of paintings to use on book covers, his mother grew afraid that he was becoming Americanized too quickly. So she sent him back to his homeland to continue his education.

The themes in Hope Is an Arrow of religious and class conflict, displacement, immigrant life, and the role of art and writing to heal the wounds of the world crackle with immediacy. Those same struggles are played out today and will be tomorrow. Young readers will see in this story a boy become a man and use his creativity to help people overcome their prejudices.

Cory McCarthy wisely employs visual and verbal metaphors and analogies to limn the story of this sensitive child torn by the social turmoil that surrounded him. Using poetic language, the author presents Gibran as an arrow shot by a bow, attempting to target injustice. When family tragedy strikes, the death of three of his family members elicits a sadness “like a wall between two gardens .” When he moves to New York City, the author describes it as “the electric shining heart of America.”

In colorful collage and acrylic paintings, Ekua Holmes deftly illustrates Gibran’s journey from a young, sensitive Lebanese to an adult Lebanese American with a universal message to share. Using fragments of fabric, newspaper clips, and original art, Holmes fills the pages with colors and textures that portray complex concepts in easily accessible ways. Gibran’s life is beautifully shown in scenes children will relish.

At last, Gibran shares his secret hope with the world in his masterpiece, his poetic book, The Prophet. Included is this passage:

“Let there be space in your togetherness,

And let the winds of the heavens dance between you.

Love one another, but make not a bond of love:

Let it rather be a moving sea between the shores of your souls.”

The final four pages include source notes, additional anecdotes about Khalil Gibran’s life, and a bibliography. Thus the cadence of metaphors in the body text is augmented by enriching details, making this story pulsate with life.

This review is based on a hardcover copy of Hope Is an Arrow that Candlewick sent to me.

I purchased the hardcover copy of The Prophet.

By Josh Funk, Illustrated by Edwardian TaylorNovember 1, 2022
82 days to go.