UPDATE: CHARACTER PUBLISHING IS NO LONGER IN BUSINESS. Some titles have been acquired by other publishers.

I first contacted Jerusha Bosarge through the SCBWI Discussion Boards in October 2010.  She was looking for submissions for her new publishing company, Character Publishing. Because I was a former teacher, Jerusha’s focus on character traits was right up my writing alley and I submitted one of my manuscripts.  Seven months later, I heard the great news, and my book, Ruth the Sleuth and the Messy Room, came out on Character’s debut list in December 2011.

Carol Gordon Ekster: Jerusha, what made you want to take on the incredible task of starting a children’s publishing company?

Jerusha Bosarge: Try not to judge me too harshly for my answer. I value honesty and the process of learning from experience too much to not share this embarrassing truth.

As a writer I frequently found myself wondering why, since I was doing the bulk of the marketing and publicity myself, was this small press publisher getting the largest share of the profits from my book? From the seat I was sitting in at the time, publishing didn’t look very difficult. Sure, there would be start-up costs, as well as the usual logistics and hardships involved in starting any small business… but seriously, how hard could it be?

Can you tell I was very young? It was a gigantic lesson in humility. HUGE.

This is the book that started it all: Inventing Ott

CE:  How long did the dream of having your own small press take to become a reality? Can you tell us a little about the process?

JB: For me, the dream first received merit when my extremely silent partner (husband) agreed to let me possibly blow nearly all of our savings creating my first list.

However, I don’t think it became a reality for me until I actually held the first hardbound proof in my hands… about a year after my first author contract was signed. 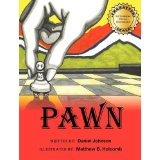 Incidentally, the first publication [by Character Publishing] was a picture book called Pawn by Daniel Johnson about a tiny, insignificant chess piece who dared to take a chance and become more than she seemed.

JB: Honestly, I believe the entire process has been nothing but a series of surprises. Remember when I sarcastically asked how hard the publishing business could be? Wow. It’s hard to believe that a grown woman could be so naive.

My dream was to get the books printed, send them out to reviewers, receive awesome reviews, and quickly launch a few authors to best-seller status. I guess the first big surprise came when I was ready to send the books out to reviewers, but they wouldn’t accept them because the books were already published. It turns out that most reviewers require a 4-month pre-publication submission. Yikes! That was a very harsh lesson to learn the hard way… and costly.

Another issue that surprised me was that some authors are extremely resistant to the editing process. People often wonder why this surprised me so much, when it was so predictable to others. I think this is because when I was a first-time author working with a small press, I was just so incredibly grateful and honored that someone was willing to sink more than $10,000 printing something that I, a complete stranger, wrote. I was very poor at the time, and that was such a large sum of money, that it didn’t even cross my mind to complain or to question their vision.

I just assumed everyone else would feel the same way about my small press. But, now I see that many authors consider the words they put on paper to be their babies, completely perfect in every way, and they do not like to hear any suggestion otherwise. I now try very hard to be more sensitive to this.

The greatest challenge in this business has been marketing. Realizing that it takes many years to build up the name and reputation of a small press to the status of mere legitimacy has been a very tough reality for me to accept.

My greatest joys so far have been taking the stories that I like, using my own imagination and creativity, to change manuscripts on paper into something more. The finished products are my greatest joys. [You can see all of the Character Publishing products at this link.]

CE: You started out as a writer/journalist. You had your own book published, Inventing Ott: The Legacy of Arthur C. Guyton, (shown above) which came out in 2005 with a small press.  What was that experience like for you? When did you discover your passion for writing?

JB: I began writing out of sheer boredom, when I was on bed-rest for 3 months while pregnant with my first child. Before that point, I really hadn’t written much at all. My college degree was pre-med biology, and I had no previous interest in subjects outside the science field. Pregnancy changed me completely, opening up a career path I never before considered.

As I said before, the publication of Inventing Ott was a bit frustrating for me. Like most authors, I had no say in the creation of the book, and the small press I used rarely published children’s books. I just don’t think they knew how to make it appealing to children, who are usually sticklers for choosing books by their covers.

The most wonderful part of writing Inventing Ott, however, was realizing that I enjoyed writing. I still write as often as I can at home and on my blog.

CE: One of your own picture books came out on Character’s second list.  Can you tell us a little about Milly: Tall & Small, A Double Feature Book? How did the experience compare with when you had another publishing producing one of your books?

JB: Since I began publishing books, I have worried to death about the price. I have not yet reached the level of success that would allow me to order large quantities of inventory at one time. Therefore, it is difficult to keep printing costs low, and this translates to a higher retail price for each book than I am comfortable charging.

is a prototype designed to make the book more valuable to customers. It is a double feature book with two distinct covers (front and back) and two distinct stories for the price of one. I wanted to see if this format would make the higher price seem more reasonable. I didn’t want to risk this nontraditional format on an author under contract, since it is difficult to get reviews for unique formats; thus, I wasn’t sure if it would sell. So, I published two of my own stories. This way, no author would be disappointed with poor sales.

I didn’t put my name on the front cover of this book, because I didn’t want credit. I don’t want reviewers to confuse Character Publishing with a vanity press or self-publishing company.

CE: Are you still writing your own stories? How do you balance your own writing with running Character Publishing as well as your family of four children?

JB: I do still write, but not for children. And, I no longer have time to submit my work to publishers. I mostly write for me or for the blog. As it has always been, my children’s needs come first in this business. Yes, even at the expense of Character Publishing. I am, after all, in the business of raising children with good character. Ironically, I wouldn’t know how to do that if I put the business first.

CE: How do you see the future of Character Publishing? Are you still open to submissions and could you direct those who are interested to your submission guidelines?

JB: I am in the process of updating the Character Publishing website to include changes to these submission guidelines. I would like to only accept new submissions between January 1 and March 1 each year. This will free up more time for me to market the books already under contract. If, however, there is someone out there with a biography about an unsung hero, preferably from the United States, I would love to read that any time of year.

CE: What’s in the future for Jerusha Bosarge?

JB: For the first time in 13 years, all four of my children are in school until three o’clock each day. This is a very big deal for me since, until now, I was a publisher only when it fit into my children’s busy schedules.

I now have regular working hours, and I have opened up a new Character Publishing store. Character Publishing has now also expanded to include a few retail products!! I expect the next 13 years to be just as surprising as the last 13, and I can only hope that they will be as rewarding.

Also from Character Publishing, look for The Raindrop Who Couldn’t Fall by Kirsti Call, another Rumpus Writer. Kirsti’s book launches on December 15, just two days away.