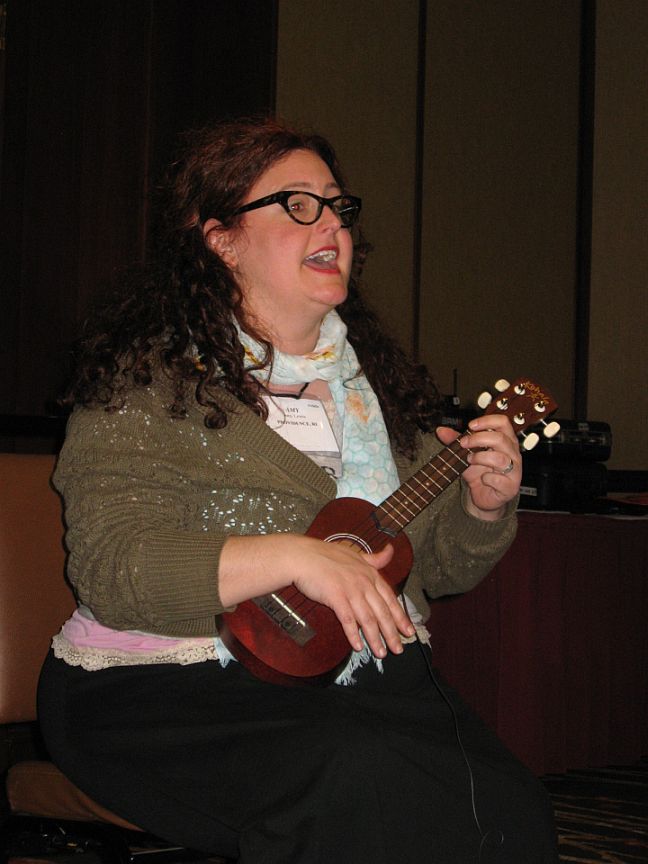 The 2014 New England Regional SCBWI conference was held in Springfield, Massachusetts this past weekend, May 2 to 4. I was fortunate to attend all three days, and my brain and heart are supersaturated with inspiration, insight, and images of people and events. Going into the conference I knew that, like a well-crafted picture book, I’d need to focus on just one slice of this event to come up with a manageable blog post.

I chose Saturday’s Open Mic Poetry Slam, hosted by Josh Funk and Alicia Gregoire. From what I’d heard, last year’s event was sparsely attended due to the location. This year’s event was well-situated in a room with glass walls off the hotel lobby, adjacent to the hotel bar. The turnout was excellent, with over twenty people signing up for the open mic and many more who came to enjoy the show.

The evening started in song with Amy Eller Lewis of the Unreliable Narrators performing Amanda Palmer’s “The Ukulele Anthem” on—what else?—a ukulele. Can ukuleles truly banish evil and save the people? Hey, if children’s books can do it, then ukes can, too.

Over the course of the evening, the audience was treated to a range of genres and offerings—not only poems, but also queries, picture books, excerpts from historical novels, fantasies, fairy tales, books about rainstorms, musicians, dogs, witches, meditation, and many other works. My apologies to the amazing performers whose names I didn’t catch. Here are a few more whose names I did.

Janet Costa Bates read three poems that fit well with the recent push for more diversity in children’s books, including a delightful poem about the innate beauty of all different kinds of hair. Alison Goldberg also diversified the offerings with her picture book manuscript, “I want to play the trombone like Melba Liston,” in which a child is inspired by a phenomenal twentieth-century jazz musician who also happened to be an African-American woman.

Josh Funk shared both a recent work-in-progress and a satirical letter to a publisher in which he rejects their rejection of his manuscript, and looks forward to seeing his work in print. Hayley Barrett shared a story about a dog, Kaboodle the Schnoodle, a schnauzer-poodle cross. Carrie Charley Brown, attending the conference all the way from Texas, read her story “Cloudy, Partner!” in an authentic-sounding Texan accent—one that Carrie doesn’t have in real life. I’m sure our New England accents stand out to Carrie, however!

Like anyone else, children’s writers like to let their hair down in the safe company of like-minded people. Some hilarious, but not-for-children, offerings included an obscenity-laden, alcohol-soaked list of pointers for handling rejections; a scatological poem about a cat who “goes” everywhere except where he should; and a satirical poem in which an author’s picture book character confesses the sins he’s committed while at college. Names of these performers are withheld to protect their online reputations as children’s authors!

More music livened the evening with Kirsti Call’s song “What Does the Rain Say?” Kirsti uses this exploration of onomatopoeia to engage the audience when she goes on school visits with her rain-themed picture book. Turns out adults can sound like rain, too!

The night included several science- and nature-themed offerings. Rajani Narasimhan LaRocca read her rhyming picture book about DNA, the molecule that holds the code that makes you what you are, and not something else. Her book may be of interest to adults as well as children, it does such a good job making the complex sound simple. Michelle Cusolito shared Frog Frenzy, the true story of wood frogs, which spend the winter frozen, coming out of hibernation and mating in the early spring. Reproduction was also on the mind of the warrior-woman insect in Robin Orm Hansen’s fictionalized account of a mosquito seeking blood so she could lay her eggs. It takes skill to get your audience to side with the mosquito!

The evening ended, appropriately enough, with a picture book and an adorable lullaby about going night-night, written and sung by Craig Munson. The audience responded with many “Awws!”

The theme of this year’s conference was “Create Bravely.” With so many brave, creative people daring to share their work, the event ran over by nearly half an hour. Congratulations to everyone who stepped up to the mic, and thanks to all who stopped by to listen!

Thanks to Carrie Charley Brown for the picture of Kirsti Call.