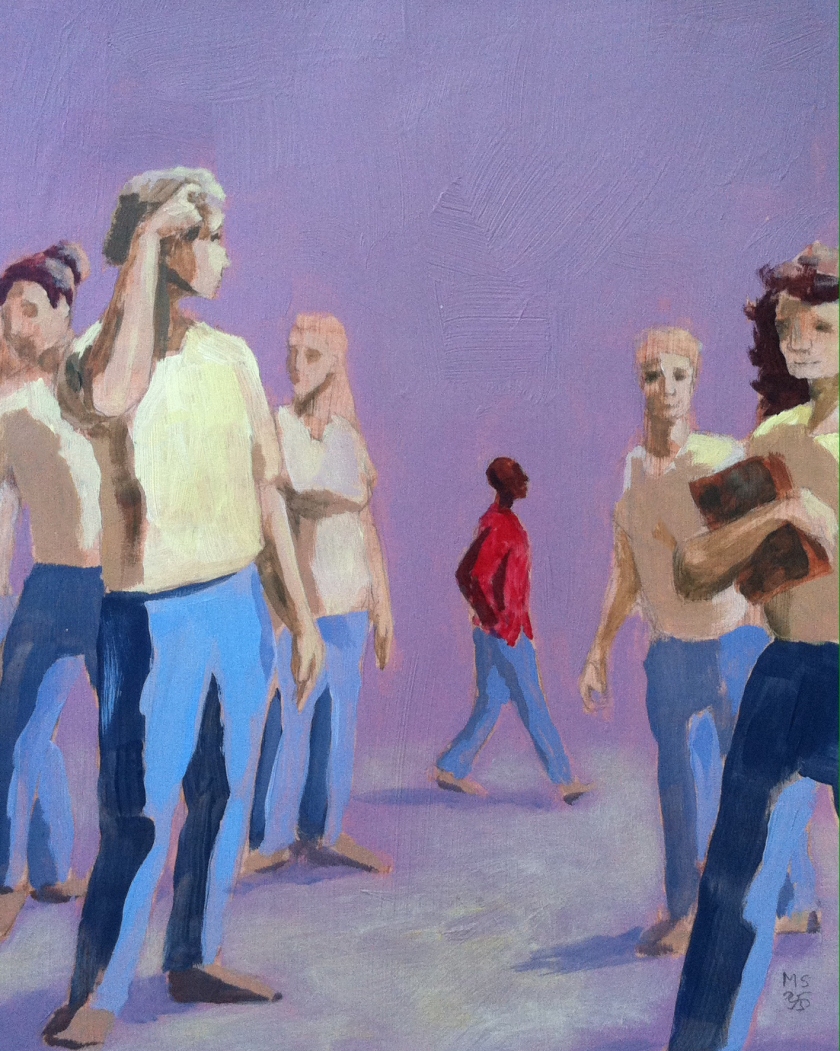 For those of you who aren’t, I hope you can excuse me for addressing the white elephant in the room. And for those of you who are — I’m guessing alarm bells just went off in your mind, because nobody starts a conversation with those words unless they intend to take it to places that get uncomfortable.

Unlike people in marginalized groups, most of us white people don’t typically find ourselves in situations where our ethnicity makes us stand out. So we aren’t confronted regularly with the topic of race, especially our own, and we typically don’t seek out discussions about it, either. But a lot of people in and around the publishing industry are talking about race right now. As writers of any ethnicity we need to be aware of what is going on. So let’s not avoid it. Here’s what’s up.

You may already be following the We Need Diverse Books movement. WNDB came about in order to correct the disproportionate representation of white characters and culture in children’s literature.* We are all aware that not all young readers are white, and many of us are of the opinion that young white readers need to practice seeing the world through non-white** perspectives, lest they grow up thinking that white equates to normal and non-white equates to other. This awareness is good: it’s all about the reader, and the reader is the most important person in the kidlit equation.

But what We Need Diverse Books didn’t initially take into account was that writers of color have already been trying — and trying, and trying — to get their own stories told. The problem has not entirely been that white writers so often choose to write about white subjects — although this is part of the problem. And the problem is not a shortage of non-white writers. Much of the problem is that writers of other ethnic backgrounds have been having a significantly harder time getting their work published.

So, as WNDB’s rallying cry snowballed, there was a matching outpouring of anguish from non-white writers, beginning with this heartbreaking blog post by an anonymous writer.

Here’s the crux of it: the publishing industry is a very white place. Agents, editors, publishers, and on up: the gatekeepers are white, and so what gets through the white filter is very white, too.

The reason the publishing industry isn’t diverse has a lot to do with the privileges that come with being white: money, the ability to choose not to interact with members of other ethnicities, and subtle, unacknowledged bias. For example: white agents may choose not to represent work that they don’t feel confident to champion due to ethnic differences. White people are generally the ones who can afford the publishing industry’s non-paying internships.  White gatekeepers are the ones deciding that there is not enough market for books that present non-white perspectives. Or when given two applicants of equivalent skill-level applying for a job, one white and one black, a white person hiring will often unconsciously default to choosing the white applicant.

And the list of reasons for the industry’s whiteness goes on. It’s not personal. Nobody in the publishing industry is malicious, nobody is behaving like that repugnant mental image that comes to mind when we hear the word “racist.” But there is no denying that there is a self-perpetuating system at work in publishing that keeps people of other ethnicities out. The term for this unintentional exclusion is “institutionalized racism.”

Intersecting this issue is another one: who should be writing diverse characters?

The fundamental answer is, of course, everybody. Our young readers of all backgrounds deserve to see literature that accurately portrays themselves and their world.

The wider answer is more complex. Some people are convinced of the near-impossibility of a non-marginalized person ever accurately portraying members of a marginalized group. But others believe that with sufficient research and empathy, writing characters who are different from oneself is possible and absolutely worth striving for.

But of course any attempt at something difficult comes with the possibility of failure. And failure is particularly scary when it means that a book may not just dwindle in obscurity, but may be actively and loudly loathed. None of us wants to invest effort and passion just to be told “this character who is supposed to be me is wrong.” But perhaps more than any other form of critique, we need to embrace this feedback, and we need to seek it out before publication, because what’s at stake isn’t abstractions of grammar or plot, but the very identities and self-worth of our young audience.

And this is where the issue of writing diverse characters collides painfully with the exclusion of non-whites from the publishing industry. Given the situation, I wouldn’t put it past any writer of color to arrive at a most bitter conclusion: that publishers want their stories but don’t want them.

If you are like I was when I encountered these ideas for the first time, and your heart is now torn into little pieces that are being stomped on the floor — yes, it hurts to learn this as a white person. Especially as a white writer who is committed to doing the right thing for a diverse young audience.

It’s a work in progress.

This is the point at which I would like to be able to dramatically unveil a solution. But of course I can’t; this problem isn’t yet solved. Which isn’t to say we can’t try to help — there are plenty of pixels online devoted to what we white writers can do to assist. Yes, we can promote books that are written by people of color. Yes, we should continue to write diverse characters.

But whatever the solution will eventually be, for sure the first step is being aware that this discussion is happening. People are on blogs and Twitter talking about race in publishing. It behooves us as white writers not to shy away from the discussion, but to listen in, learn the nuances, and to take part.

To readers who are white, whom I’ve made uncomfortable, but who stuck around regardless — thanks for listening. I can attest to how hard it can be to hear this stuff if you haven’t already been aware of it. And to readers who are other than white, whom maybe I’ve also made uncomfortable but who stuck around through this post: Kids everywhere need your stories. Keep writing. Keep submitting. All of us want you to succeed.

RESOURCES: If you know another good one, please share it.

Further Reading
I’m the one sitting alone at the table.
There is no “Evil Racist” in Publishing.
Aversive racism in traditional publishing.
NPR on the importance of writing diverse characters.
NPR: A difficult dialog beats silence.
American Indians in Children’s Literature.
The Diversity Gap in Children’s Publishing, 2015

Resources, Blogs, and Discussions
Should a white person write a POC?
The #WriteInclusively campaign
We Need Diverse Books
Writing with Color
Ten Tips on Writing Race in Novels by Mitali Perkins
Writing Race in YA: Guest Post by Nicola K. Richardson on YA Highway
Children’s Books by and about People of Color and First/Native Nations Published in the United States

Almitra Clay records her brain-spewings in words and whiteboard scribblings at http://almitraclay.tumblr.com/ , tweets as @AlmitraClay, and is writing a fantasy novel for young adults.