The Boston Teen Author Festival (BTAF18) opened its doors to more than 600 lit-crazed readers and writers this past Saturday and I was lucky enough to be one of them. 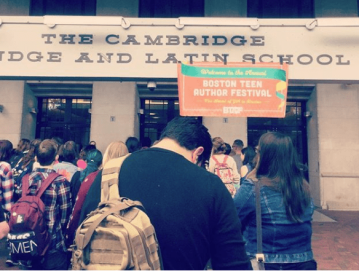 I arrived on the scene a little after 9am–30 minutes before doors opened–and was surprised to see the size of the crowd already gathered outside the Cambridge Public Library and the Cambridge Rindge and Latin School. I shouldn’t have been. As a major YA lit fan myself, the drawing power of amazing teen reads is not lost on me.

Once inside, we grabbed our swag (bookmarks, buttons, and other free little goodies) and headed toward the main auditorium for the intro panel. Dozens of helpful volunteers were there to point us in the right direction, showing us where we could find the various rooms, tables, book vendors, and (of course) the bathrooms!

Kicking off the event was an Intro panel where moderators introduced us to the 30+ authors in attendance. This year’s authors ranged from big-name YA superstars to beloved local authors and even a few debuts. Having folks there from all stages of the publishing game made for rich panel discussions on publishing and the writing life, helping attendees to see not only what things are like now, but how the industry has changed over the past few years. 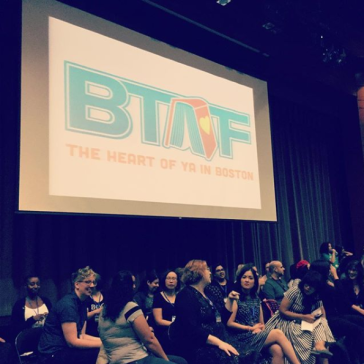 This year, BTAF18 was composed of four breakout sessions, each offering 3-4 panel options for attendees. Each panel was only offered ONCE throughout the day, so it was time to get choosey! I can’t say I went to a single bad panel…though because of the event’s massive turnout, some of the rooms did get a little uncomfortably crowded. That being said, I showed up early to each one and was able to get a seat (sorry, standing folks!).

The event was well-organized, featuring two panels followed by a lunch break, then two more panels. Since food isn’t available in the library, BTAF18 organizers were also helpful enough to provide a list of suggested lunch places for festival attendees to visit, inclusive of a variety of different dietary needs. I opted to visit the Roxy’s Grilled Cheese food truck parked right outside, which left me enough time to check out the selection brought by Porter Square Books in Cambridge (I may have added one or two to my collection…).

I’m a little devastated to say I missed the ARC-drop that happened between the 3rd and 4th panels! Swoon Reads, FIREreads, Page Street, and Candlewick all participated, offering eager readers free prepubs of upcoming titles. (If possible, it’s a good idea to keep a running tab on the event’s Twitter feed so you can keep on top of stuff like this…notes for next time!)

The other thing I missed was the signing line at the end of the festival, but guys, that thing was MASSIVE. Folks started lining up an hour before the signing (missing the last panel) and by the time the signing was gearing up to start, the line was hundreds of die-hard readers long. I couldn’t stay, but I’m sure it was worth it for those who did.

All in all, BTAF18 was a great experience—but be prepared to experience CROWDS. YA readers and writers alike can gain a lot of insight by attending…as long as they don’t mind (literally) rubbing elbows with their neighbors!