I hear it all the time. “Paul, how can I put humor into my writing when I’m not a king of comedy like you?” And I usually respond by slipping them a twenty and suggest they be a bit more subtle next time. All joking aside, putting humor into your writing isn’t that hard. Humor might be subjective, but it is also universal. Some people are easy laughers, others have their funny bone buried deep, deep, deep inside, but everyone laughs at something. The trick is finding the right joke at the right time for the story you are writing.

There are a ton of ways to do this. Physical comedy: Yes, you can write physical comedy, especially in a picture book. Watching someone slipping on a banana will still get the laughs.

Remember, most three year olds haven’t heard many jokes, so the cliché stuff will always work.

Sarcasm: This is a tough one to write, but it can work in a book, just not on Twitter. Twitter and sarcasm are a bad combination. Though I love sarcasm, I have heard it described as the least intelligent form of humor, but I disagree. When someone is sarcastic they are forcing the other person to think twice as much to get the joke. The readers need to understand what the sarcastic person is saying, and then they need to compare it to what the sarcastic person actually means to say.

Self-deprecating humor: I love this form of humor and it can be done in so many ways. One way to do it is to create a character that just doesn’t get it, but they think they do. I wrote an entire story that had a chicken who hated being called a chicken because she wasn’t afraid of anything. But everyone called her chicken because that’s her name. So, the entire joke and premise of the story is that Chicken is an idiot, but doesn’t see herself as one. Here is another example of that type of humor. Several years ago I interviewed myself, and played two different personas as myself, one persona is trying to do a serious interview, the other is being somewhat difficult. Let me know in the comments section of why you think it works, or why you don’t think it works, thereby admitting you have no sense of humor.

No matter what form of humor you lean toward, just make sure it’s appropriate for the genre you are writing for. Sarcasm may not get a laugh in a picture book, but something silly like a fish who’s afraid of the water will. A shark wearing swimmies? Come on, that’s comedy gold! The important thing when it comes to any kind of writing is to try, even if you don’t think you’re funny. Stretch yourself, give it a shot. Worse case scenario, you end up putting a penguin in a banana suit. I challenge anyone not to laugh at that. 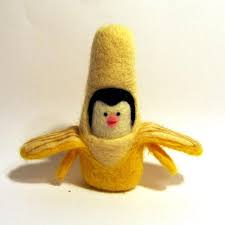