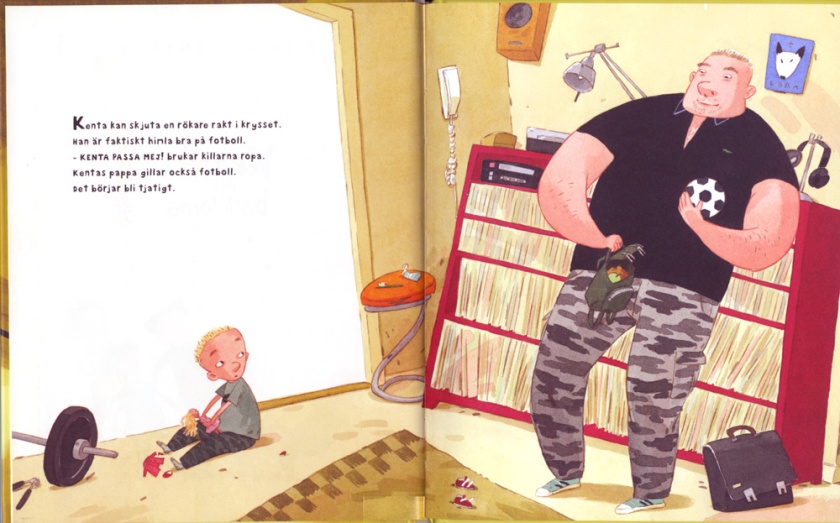 Color, whether subtle or saturated, has immense power. For picturebooks color can be exploited for its emotional value as well as being a property that unifies the many pages that comprise a story. Each of the following world books has taken good advantage of color’s theatrical properties. And the artists each use other visual connectors to link their series of paintings into a unified whole.

Johannas Bilder (Johanna’s pictures) by Wenche Øyen is a poignant flashback story about a child struggling to understand the loss of her father. As such the watercolor and pencil artwork is subtle, yet powerful. Touches of red-orange and neutral blue stream throughout, however the palette is appropriately subdued.

The artist has also carefully controlled the scale of the images on each page, in much the same way that Maurice Sendak did for Where the Wild Things Are. In Sendak’s book the initial images are small, surrounded by the white of the page to reflect Max’s feeling of being confined. When he enters his wild dreamscape the borders begin to disappear and eventually the art bleeds off successive  double pages. Toward the end of the picturebook when Max is coming back to reality the images grow smaller and the borders reappear, but the images never return to the tight scale they were at the beginning because Max has learned important things and so he has grown. 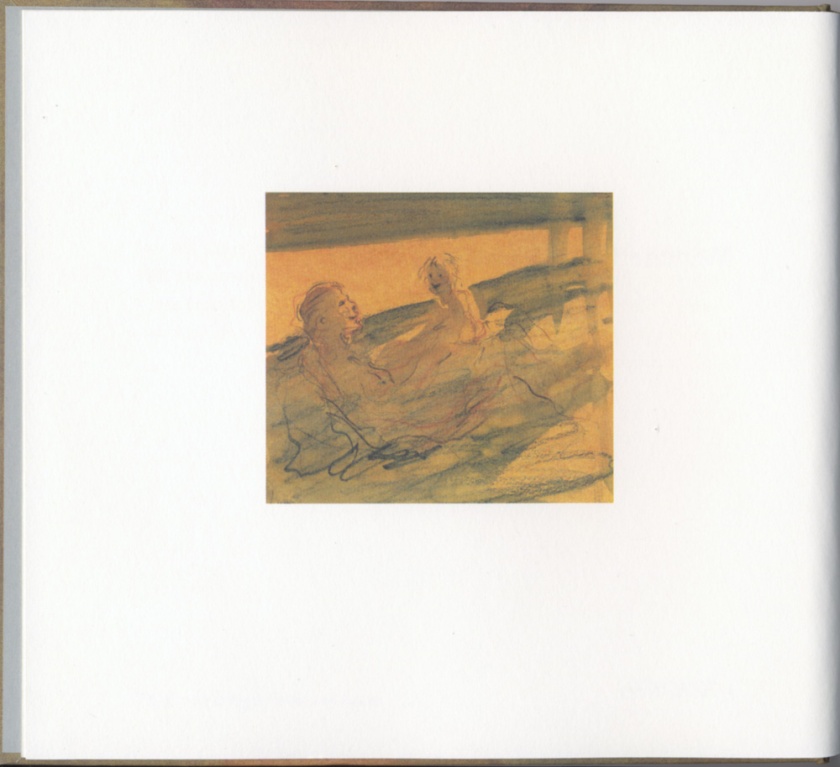 Wenche Øyen has also controlled the scale  of her images carefully to maximize emotional impact. Johanna’s face fills the frame on the cover so that we identify intensely with her. Understated warm color dominates.

The first sentence in Johannas Bilder is something like “The house that never disappeared from her dreams is still there.” It was where her father bounced her on his knee, where they appear enjoying a playful moment. The image is small since this is a memory from long ago when things were good. 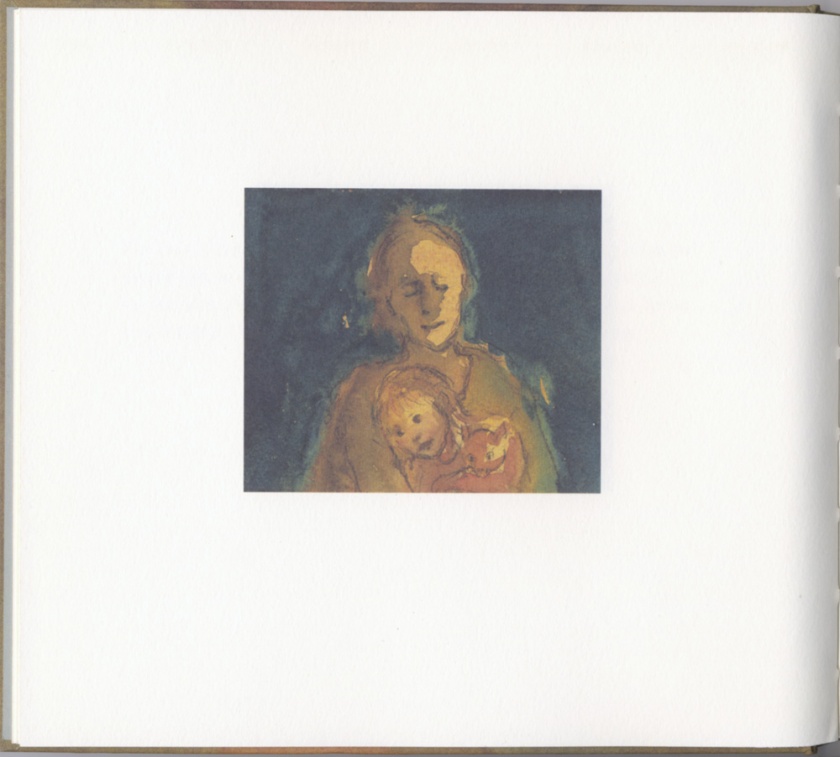 When her mom has a difficult something to say to Johanna, the image is equally small emphasizing the closeness between mother and child, yet presaging the shock of bad news – that Johanna’s father does not exist anymore.Their faces are warm, but the background becomes a dark shadow encompassing them. 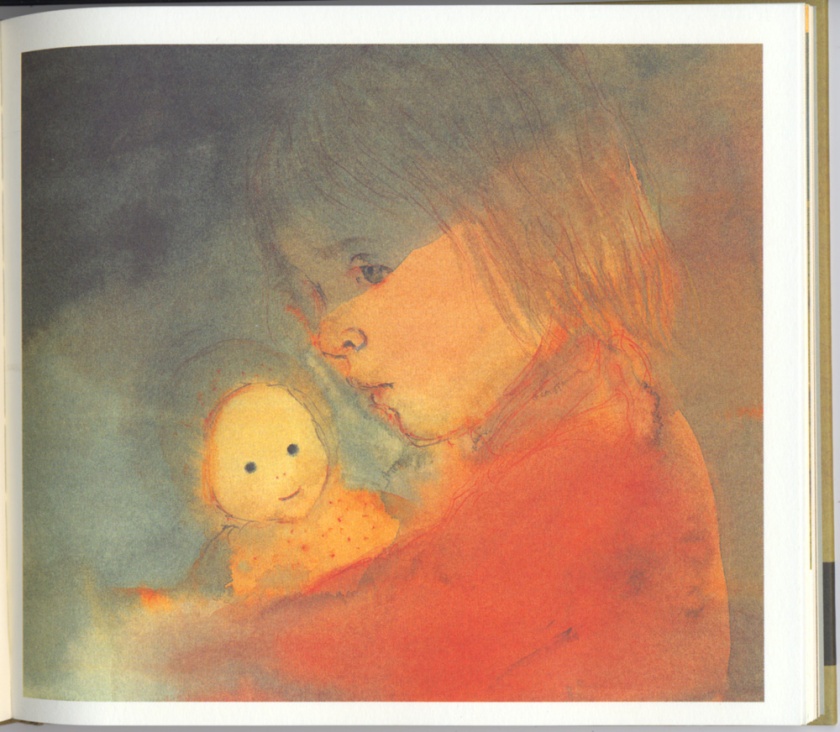 The following page shows a close-up of Johanna with her doll, larger but still with a bit of white border. A shadow crosses her face dramatizing the sorrow and confusion she feels. Her clothing and skin are warm red, but the shadows around her are neutral blues.

The images continue to have borders, sometimes wide others narrow, until Johanna escapes into dreams, the basis for her future paintings. Now the image bleeds off all sides of a double page spread, in the same kind of psychological release Sendak used. Dreams and artmaking are places to resolve difficult issues, without verbal interference.

In Kenta Och Barbisarna (Kenta and the Barbies) Pija Lindenbaum uses the white of the page as a unifier throughout the action and the color red and its tints to suggests the primal nature of kindergartener Kenta’s explorations into the value of each gender.

It’s obvious from the get-go that although Kenta is a true boy (suggested by the way he holds his…stick on the cover) who is excellent at “fotball” and loves horsing around with the guys, he also has a Barbie doll dressed in red.

Constantly curious about what Agnes, Mira, and Gittan are doing, Kenta doesn’t see anything wrong with the way girls play, especially when Anton, Nils, and Åke bully the  smaller kids on the playground. Kenta and his big strong dad wear camo cargo pants and both like football, yet Kenta joins in with the girls and their Barbie dolls. 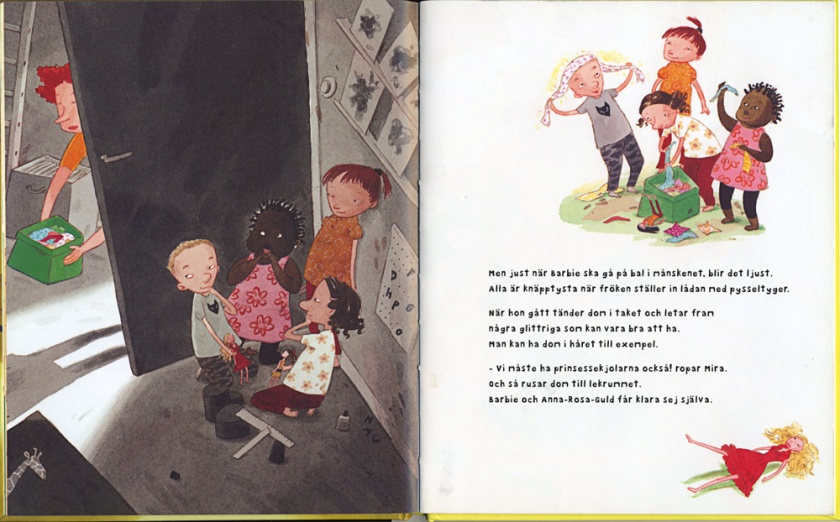 When a teacher drops off a box of princess costumes Kenta dons a fluffy pink skirt along with the girls and twirls with abandon. His guy friends appear. In a twist at the end the boys decide that it looks like fun and each also dons a princess-y outfit and ballets their way into a football game. 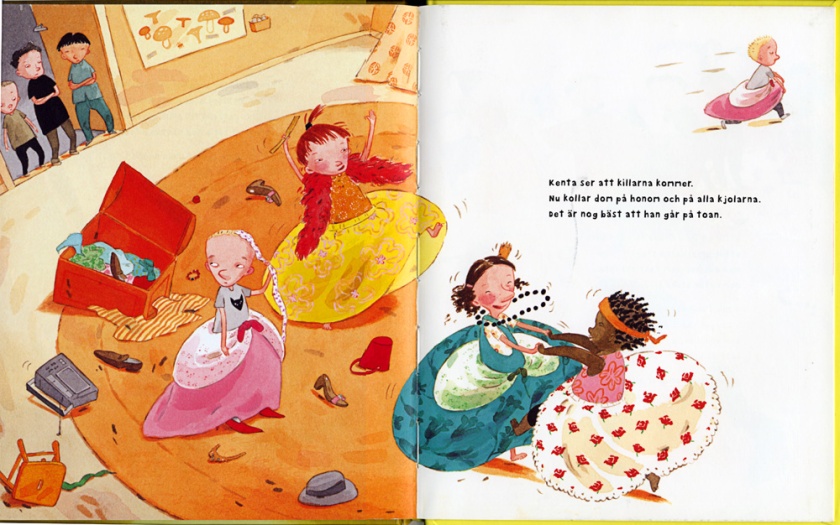 There is an additional design connector in Kenta’s story besides color. The eyes, especially Kenta’s, link different areas of each page, conveying some of what the characters are thinking. We see that while Kenta is roughhousing with his friends, his eyes are on the trio of girls in the sandbox. When he and the guys are making robots, he watches the girls playing with their Barbies. The way he glances at his macho dad is fraught with conflicting emotions, and in some scenes each of the characters is gazing at another, always with the same almond-shaped eyes.

Here is a blog post about translating this book. 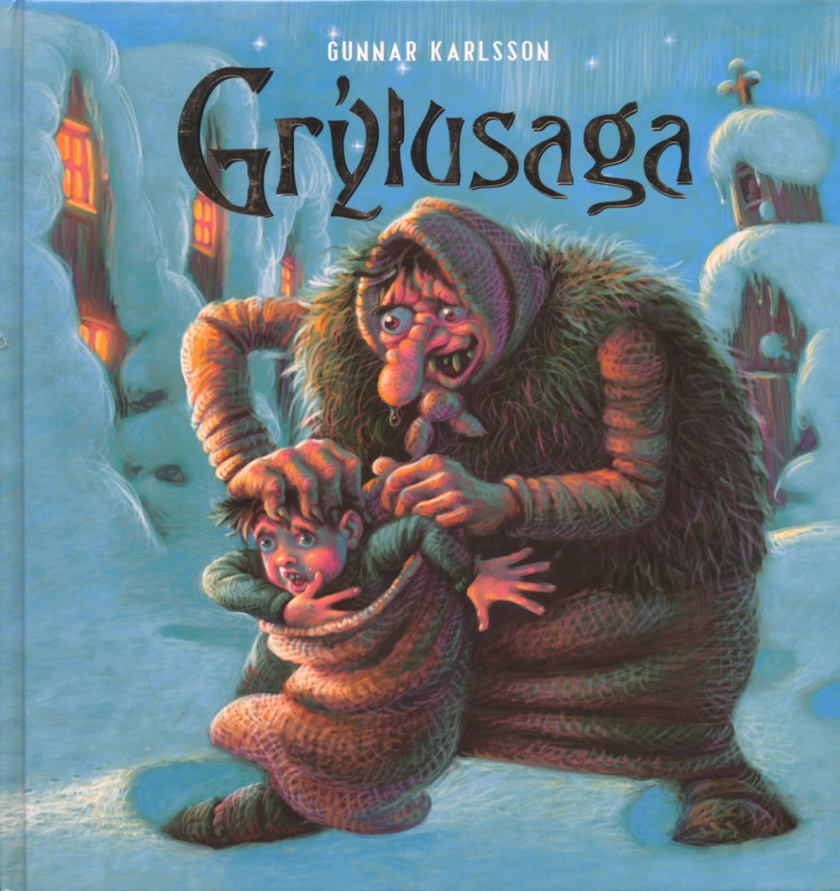 Grýlusaga, or the story of Grýla, is an ancient Icelandic tale that lives on today. As may be obvious from the cover, the main character is a snotty old ogress who captures naughty children to eat them. They have only one chance of escape – by doing some good deed. She and her ne’er-do-well husband Leppalúði have thirteen sons who traditionally wore rude clothing and played nasty tricks on people. Recently they have morphed into Iceland’s Thirteen Santas and are jollier in their new red outfits. So that’s a bit of background on Gryla and her family.

Complementary colors of blue and orange unify the art throughout this book. For variety the balance between these colors varies with the outdoor scenes predominantly cool blue and the interior views mostly orange depicting the warmth of hearthfires and oil lamps. Yet each page has some of both and the saturation levels change depending on the timbre of the action – when the naughty boy is acting up, being spanked, or kidnapped the colors are heightened, when Gryla is plotting quietly or in conversation with her hubby the tones are more muted, therefore controlling the drama. Another visual device frequent throughout is the glistening icicles and the drips from Gryla’s nose. They each have a quaint sparkly sense of rhythm.

For other World of Books posts look here:

By Kim Chaffee, Illustrated by Alexandra BadiuJanuary 10, 2023
40 days to go.