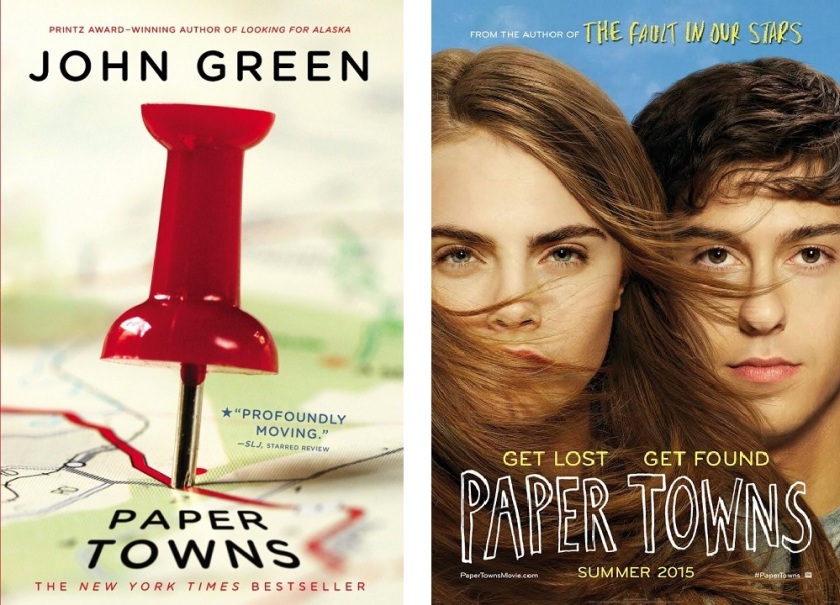 Note: While technically spoiler-free, this review contains a quick description of the beginning of the story and speaks thematically of parts of the book and movie that may predispose you to a certain mind-set.

John Green’s books have been big players in the young adult (YA) world for a while, especially after the movie version of his most recently-published book, The Fault in Our Stars, was released. The movie adaptation of another of his books came out in theaters recently, and I decided to read the book and watch the movie in the interest of the never-ending debate, “Did the Movie Honor the Book?” Very different from The Fault in Our Stars, Paper Towns offered a slightly riskier plot structure and less-concrete themes than its more recently-written sibling.

The story’s narrator and main character, Quentin, is a high school senior about to graduate. But the character the story revolves around is Margo, a childhood friend of Quentin’s who seems impossibly cool and impossibly unattainable. The estranged friend Margo suddenly enters his life again and takes him on one of her impossible adventures. But the real plot begins after they finish their quest, when it is discovered the next morning that Margo has vanished, and Quentin is convinced he can find her.

The weakest aspect of the book was its pacing. There were wrong turns and dead ends in the mystery and hunt for clues, and descriptions of several aspects of daily life that were not important. The movie, with its time limit, fixed that issue by eliminating much of what did not move the plot along. The screenplay also framed several events in the story in ways that cleaned up the timing of events. However the film was not able to convey as much of the contemplation of the meaning of life, interpersonal relationships, and literature that helped to make the book stand out–which was understandable, but still a loss.

The real difference between the book and movie was the endings.

While neither ending seemed out of place in the progression of the story, the book and the movie each told a story with the same plot, but with different conclusions and interpretations. The difference in the ending of the same events and characters reminded me of how various works of literature can be interpreted to mean different things. Although this is more common in abstract works, such as religious parables or poems (like the Walt Whitman poem featured in Paper Towns), the fact that both endings felt true to this story speaks to the unusual abstract nature of the story and the creative license afforded to the scriptwriters.

The movie’s anti-climactic resolution said that you must relinquish your false expectations of life in order to be happy with what you actually have.

The metaphorical ending of the book (which was strangely absent in the film), said that idealism and imagined realities must be sacrificed to move on with your life.

Both versions, however, still encapsulated the idea that things are rarely what you expect them to be.

The Fault in Our Stars felt like a film adaption of a YA book, but Paper Towns felt more like a slightly drawn-out indie short film. The anticlimactic ending, intensely personal journey, and half-formed existential thoughts may confuse some who expected a structured romantic arc similar to that of The Fault in Our Stars. The apparently meandering and somewhat rough plot of Paper Towns intentionally echoes the time of life that it was written for and about, the time in your life when you realize that the world is not perfect and you must figure out where you fit into it. This existentially messy realization is part of what helps the story resonate with the teenage demographic. The unfinished feel may not connect as well to older audiences, but this riskier, more abstract older sibling of The Fault in Our Stars is worth watching or reading both for teenagers who may relate, and for those who write for teens looking for something that strays from most YA formulas. Like the character it revolves around, this story is a bit of a wildcard that runs from the herd rather than with it.

Sarah Knowles graduated high school in 2014 and is on summer break following her first year of college. When she has time, she writes YA. She is a former member of the critique group that blogs at Writers’ Rumpus, and, in the past, has been active on the teen writing site Figment.