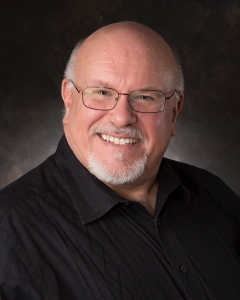 CAROL GORDON EKSTER: Having taught elementary school myself for 35 years, when I saw Rob Sanders’ website and this quote, “A Writer Who Teaches, and a Teacher Who Writes” …I was interested! Let’s find out about this children’s author.

Rob, tell us how you became a teacher who writes. What has been your path to publication?

ROB SANDERS: I’ve never followed a straight path anywhere, and my picture book journey is no exception. I went to college and graduated with a degree in elementary education and a minor in music education. But I never made it into a classroom of [my own]. After graduation, I went to seminary and studied religious education. That led me to working for nearly fifteen years as an editor, editorial group manager, and product designer for a large religious education publishing company. I wrote and was published extensively in those days—but only products the company produced and that were sold in their book stores.

When I moved to Florida, I dusted off my elementary education certificate and began teaching. I’ve worked primarily as a language arts teacher and a writing specialist. My current role is as a writing resource teacher in an inner-city, Title 1, magnet school. My responsibilities are to help teachers provide strong writing instruction, and I work a lot with student writers one-on-one and in small groups.

Some of my students (and the fact that I was turning 50) provided the final push into picture book writing. My process for teaching writing then and now is that I use mentor texts to show examples of great writing, model how I write using the craft we’re studying, and then let kids practice using the craft in their writing. My students started asking, “Why haven’t you written a book, Mr. Sanders?” I didn’t have a good answer for that question, and decided it was time to do what I’d long dreamed of doing.

I joined the Society of Children’s Book Writers and Illustrators (SCBWI), and started attending conferences, reading books and blogs, and learning all I could.

In the last eight years, I’ve been fortunate to sell seven picture books, land an agent, and finally be able to use my own books when writing with my students. 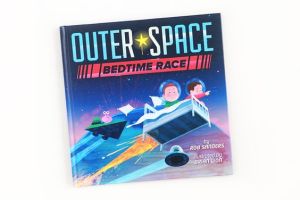 CGE: Can you tell us about your books coming out and how you landed those two incredible illustrators, Dan Santat and Debbie Ridpath Ohi?

RS: RODZILLA will be released by Margaret McElderry Books (an imprint of Simon & Schuster) on May 9. The book is illustrated by the one-and-only Dan Santat. RODZILLA was one of the first manuscripts I wrote. The manuscript was in a drawer for six or seven years before it found a home. Years ago I showed the manuscript to one of my mentors and she said something like, “I don’t get boy humor.” Later, my agent shopped the manuscript around a little, but after a few passes we put it away.

After hearing [publisher] Justin Chanda speak at an SCBWI meeting I drove home trying to think of something I had in my files that might be energetic, humorous, wacky, and unexpected—the kind of things I picked up that Justin liked [from hearing him speak]. Before I reached home, I knew RODZILLA was the manuscript to send. I emailed my agent that night. He sent the manuscript to Justin the next day and we had a verbal contract by the end of the week. 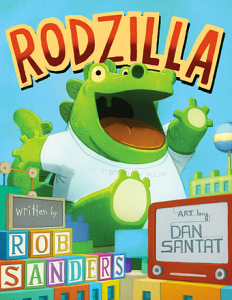 As for how a Caldecott-award winning illustrator became involved with the project—well, that’s all due to Justin Chanda. From the beginning, he had a vision for the book and had Dan in mind (but Justin didn’t tell me which illustrator he was pursuing). Dan had just won the Caldecott and the chances of snagging him and getting on his schedule were slim. I think he even passed on the project at one point. But eventually Dan worked RODZILLA into his busy schedule and his art has added a huge, new dimension to the story.

I was working to develop a character with lots of stories to tell for [publisher] Maria Modugno, who at the time was with HarperCollins. Maria had tried to acquire another book from me earlier on, and I knew she was interested in my writing. She was excited about Ruby Rose, and the HarperCollins team wanted the perfect illustrator for it.

They “auditioned” (their word) l-o-t-s of illustrators. Debbie was fairly new to illustrating back then. Her vision for Ruby Rose stood out from the other illustrators, and she was signed on to illustrate the books.

Margaret Anastas took over the RUBY ROSE books when Maria moved to Random House. Margaret has championed the books through the publication process. RUBY ROSE—BIG BRAVOS will be released in August of this year. 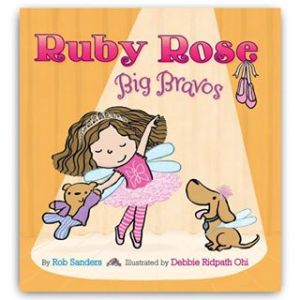 So how did I land Dan and Debbie? I didn’t. The editors and art directors working on my projects did. I am still in awe and more than a little grateful!

CGE: How have you involved your students in your writing process and successes?

RS: As I mentioned above, my students encouraged me to get busy writing my own books. One thing I’ve learned is to not tell kids when I have a new book deal. They’ll ask every day when the book is coming out. And since the process takes two years or more, that’s a lot of asking! I enjoy using my books for writing lessons or as read alouds. Even more, I love when I see kids checking out my books from our school’s Media Center, or when they tell me about their favorite book by Mr. Sanders.

I jot down lots of things I hear students say, and my writer’s notebook is filled with incidents from school that may one day inspire a book. However, I don’t read my pre-published writing to students. Just like family members, most students think anything their teachers do is wonderful. That’s not exactly the kind of “objective” feedback I need. 😊 So, I wait until I have a printout of the book with text in place, or F&Gs, or (even better) an early copy of the book to show and read.

CGE: What does the future hold for Rob Sanders?

RS: The future will find me continuing to teach and write. Balancing the two can be a challenge, but it’s what I do. I’m working on novels and have many (read that M-A-N-Y) picture books in progress. After RODZILLA and RUBY ROSE—BIG BRAVOS, my next two releases will be non-fiction picture books. PRIDE: THE STORY OF HARVEY MILK AND THE RAINBOW FLAG is being illustrated by Steven Salerno and will be released by Random House in 2018 for the 40th anniversary of the making of the first rainbow flag. STONEWALL: THE UPRISING FOR GAY RIGHTS, also from Random house and illustrated by Jamey Christoph, will release in 2019 in celebration of the 50th anniversary of Stonewall. I am excited about these ground-breaking books and the vision my editor, Michael Joosten, has for them.

And you can connect with Rob here: