A discouraging event in recent news regarding the American attitude toward our environment inspires a look at children’s books offering another perspective. I’ve chosen to show you two picture books from other nations and one from a nation within our own that show respect for the natural world, which all lives depend on.

Gali…La Tortuga: un cuento mágico by Blas Luje Peñafiel with illustrations by Elías Díaz (Parque Nacional Galapagos, Ecuador, no date indicated) may be fiction, however at its heart is the desire to keep nature in balance. A young turtle named Princess Gali, of the enchanted Galapagos Islands, goes with the other land and sea animals to the Turtle Reserve on Santa Cruz Island where Pingui the priest blesses her with the collective wisdom of all her kind. She has inherited the stewardship of this unique place and its inhabitants, an awesome responsibility.

Regrettably, there are three jealous animals: Piglet, Ratty, and Billy Goat who try to prevent her from leading the reserve. They threaten to bite or starve her, but their plot is overheard by Finchu the finch who tells the Galapagos hawk who alerts Napo, the wise turtle. Napo enlists the help of Hawk and the evil plot is foiled.  The animals have worked together to avert an ecological tragedy.

Suddenly, there is a forest fire. Gali calls a meeting of animals and in desperation they decide to seek help from humans. Hawk remembers a kind boy named Damián who had once helped him escape from a net. Damián calls for aid and the humans put out the fire. People and animals worked together to return nature to the Great Balance. 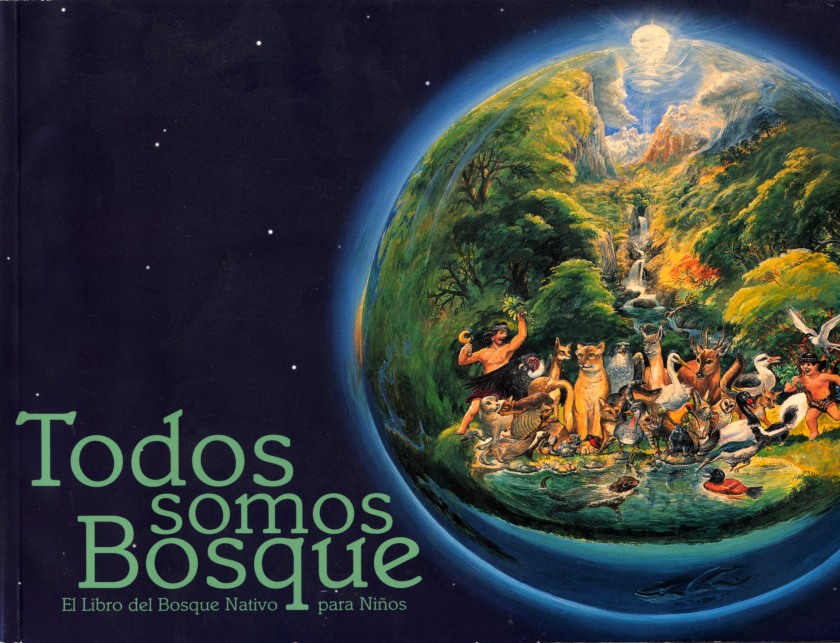 The forty pages of Todos somos Bosque (We are the Forest) written by Adriana Hoffmann J., Malú Sierra M., and Carlos Prosser G. with illustrations by Rodolfo Hoffmann M., show that we, along with animals, birds, fishes and other life forms, are elements of the ecosystem of Earth, which is part of the universe. The realistic-style paintings show various features of the forest and in other scenes the forest animals and people compromise and learn from one another in an effort to avoid abuses toward nature.

Published in 1999 by Defensores del Bosque Chileno, the flap copy says that the mission of the book is, “The formation among young ones of an awareness on the importance of these unique ecosystems that are being so intensely ravaged in our country.” One of my critique group partners lives in Chile and not long ago she described terribly destructive flooding and landslides there. Could this have resulted from deforestation? Perhaps the adults making economic decisions there need to read this book.

Each of these two books gives a direct perspective, written for children, about the way we should view our relationship with the Earth. The third picture book, Gift Horse, is a Lakota Sioux story written by S.D. Nelson, a noted Lakota author illustrator, which is not specifically about our relation to and nurturing of the natural world. It is a coming of age story in which respect for the natural world is a significant thread throughout. Respect leads to wise choices.

When his father gives the Lakota boy a horse it is a step towards manhood, but this particular horse is a metaphor for the boy’s relationship with his environment. The gift horse “was the blue-grey color of a thunderstorm, and her back was a blur of white spots, like hailstones raining down.” The boy names the horse Storm and paints her with a lightning bolt design, a red handprint indicating his stewardship of the horse, and encircles her eye in red so she will see well, then ties eagle feathers to her mane. She now bears his mark, a symbol of speed, and the power of a storm. When he rides her they stir up a flying cloud of dust, so he is thereafter named Flying Cloud. Flying Cloud and Storm brave a blizzard, but Storm leads them back to home, showing Flying Cloud’s dependence on the horse. Flying Cloud is almost ready to be a man so he searches for a porcupine to provide quills to decorate the shirt his mother is making for him. Instead of killing the porcupine, he puts a blanket over it, which quills become entangled in. He has harvested what he needed without harming the animal. Later, he participates in a hunt for bison and succeeds in killing one. However, rather than exalting in the riches of his kill, he bends to the bison and thanks it for its meat which will feed his people and its hide that will clothe them, keeping them warm.

Again, the message is respect for the bison and its natural world. Although the Lakota sustained themselves by taking what they needed from their environment, they acted with respect, restraint, and a sense of closeness to the natural world that is enviable. They were aware of the important legacy they left for their own future generations.

Perhaps the children of the future will have the wisdom of Gali and Flying Cloud to be better stewards of our Earth than we are today.