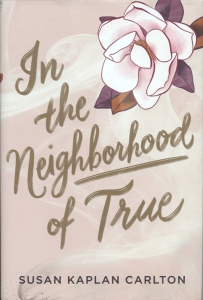 Just two days after the cover reveal for IN THE NEIGHBORHOOD OF TRUE, the Pittsburgh synagogue shooting happened. The Christchurch, New Zealand mosque shooting was three weeks before the book’s April 9 launch date, and the Poway, California synagogue shooting was less than three weeks after. And it’s safe to say that countless other acts of hate happened in those same six months, whether or not they made the international news.

Today’s news makes this new historical novel for young adults especially relevant. IN THE NEIGHBORHOOD OF TRUE by Susan Kaplan Carlton is set in Atlanta, Georgia in the months leading up to the 1958 bombing of a Jewish synagogue by white nationalists. When her father dies unexpectedly, Ruth Robb, a sixteen-year-old native New Yorker with a passion for fashion, is suddenly thrust into Atlanta’s high society world of ball gowns, debutantes, and an all-white, all-Christian private high school. But entering this world requires hiding the fact she is Jewish. Ruth is seduced by the beauty of the South, the desire for acceptance, and the intriguing challenge of figuring out new fashions. She is willing to let classmates assume she is Christian—without quite lying, but without telling the truth, either.

Ruth’s Christian grandmother would like Ruth to renounce her religion and accept her place in the family lineage of Magnolia Ball Queens. Ruth’s mother, who converted when she married Ruth’s Jewish father, requires her to attend a Temple event for every dance and date. Ruth is happy with her new friends, but feels at home at Temple, where memories of her father are strong. Ruth falls hard for Davis Jefferson, a boy she meets at school. But she also appreciates Max, a young man at Temple who fights for social justice. (Spoiler: no love triangle.) Davis appreciates Ruth’s honesty and openness; she hasn’t yet learned to play the social games taught at “tea and etiquette” lessons. But she is lying to Davis every day that goes by without telling him she’s Jewish. Everything comes to a head the week of the bombing, when Ruth can no longer deny the hate that lies beneath the surface of all that pastel beauty, and she has to decide who she will be and what she will stand for.

In the midst of such a serious subject, Carlton’s humor keeps the story moving. I found the author’s use of fashion as a storytelling tool especially intriguing. Ruth believes in the power of the perfect red lipstick; her grandmother speaks of the power of pearls, and persuades Ruth to try on her mother’s Magnolia Ball gown. Max’s uniform of plaid flannel shirts disquiets Ruth because it’s so careless, while Davis’s crisp button-downs unsettle her for an entirely different reason. Ruth’s agonizing over fashion choices often makes her late—a realistic character flaw that is both endearing and exasperating. Through Ruth’s eyes, we notice the relationship every character has with their clothing, and understand how the right clothes can prepare a person for the day ahead, whether it’s a high school classroom or a courtroom.

The novel is not a dramatization of the actual Temple Bombing; Carlton fictionalizes the people and the event in order to bring Ruth closer to the action. But it is firmly in the neighborhood of true: well-researched, firmly grounded in the times, the place, and the tone of the era. Read the book to find out what Ruth does, how Davis may—or may not—have been involved in the bombing, and whether their love survives the blast and its aftermath.

IN THE NEIGHBORHOOD OF TRUE