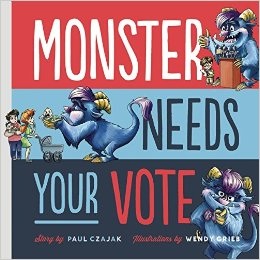 What happens when you, the type of writer who writes solely from inspiration, is asked by your publisher to write about a topic you never thought of? To create a story that didn’t come from deep inside your creative conscious? Well, unless you’re high on the latest mind-altering drug, you say “Thank you Sir (or in my case Ma’am)! May I have another!”

I have been lucky/cursed to have two such requests from my publisher. The most recent is a request for Monster needing a doctor or a check up. But the first request was one that would capitalize on the 2016 U.S. presidential election, Monster Needs Your Vote. (Like the 2016 campaign season, the book is launching well ahead of the 2016 election–next week, in fact.)

The reason I write lucky/cursed is because that’s the best way to describe how I felt. Lucky is self-explanatory; it’s much easier to sell a manuscript to a publisher when they ask you to write it. Cursed, because it means you have to write about something you didn’t initially want to write about, and that’s hard. When my publisher first asked me to write Monster Needs Your Vote, I thought, “This is crazy, please not politics, not for a picture book. What next, religion? How about Monster Needs Confession?” (By the way, that’s been written and trademarked–at least I SHOULD trademark it.) This would be the first story that I would have to write that I wasn’t inspired to write. Writing suddenly turned into that four-letter word that I was hoping to avoid…work. But I decided I wasn’t going to look at that way, instead I was going to look at as a challenge! You’re mine, politics! I shall OWN you! I shall blend your intricacies in meter and rhyme with the lightheartedness of a picture book. Okay maybe I didn’t say that, but I thought it. Yeah, I didn’t think it either, but back off, it’s my story!

Then the inspiration hit me. Not the WHAT the story was going to be about, that was from the publisher. What came to me was the heart of the story, the WHY. Why was Monster getting involved in politics in the first place? That’s when it occurred to me that no matter where the idea initially comes from, the creative process is still the same. Inspiration is still an integral part of it all–it’s why they call it CREATIVE WRITING (note to self: trademark that). This project may not have started out as my idea but after running with it, it became one of my favorites. I loved coming up with different rhyming lines that used the political jargon that we hear during elections. Not all of them survived, like this one:

Cavalcades and big parades, Monster made the rounds
He spoke in every single state, not just the battlegrounds.

I had to kill a darling, but it was still fun to create. I grew as a writer and learned something of myself during this project: that as long as I am creating something, I will never consider it work. 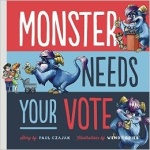